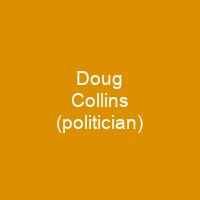 Douglas Allen Collins is an American politician currently serving as the U.S. representative for Georgia’s 9th congressional district. He previously served in the Georgia House of Representatives from 2007, representing the 27th district. Collins also serves as a chaplain in the United States Air Force Reserve with the rank of lieutenant colonel.

About Doug Collins (politician) in brief

Douglas Allen Collins is an American politician currently serving as the U.S. representative for Georgia’s 9th congressional district. He previously served in the Georgia House of Representatives from 2007, representing the 27th district, which includes portions of Hall County, Lumpkin County and White County. Collins also serves as a chaplain in the United States Air Force Reserve with the rank of lieutenant colonel. He is a member of the Republican Party. Collins is a graduate of North Hall High School and North Georgia College & State University. He attended the New Orleans Baptist Theological Seminary, receiving his Master of Divinity in 1996. He also earned his Juris Doctor from Atlanta’s John Marshall Law School, in 2007. Collins worked as an intern for Georgia U. S. representative Ed Jenkins before working as a salesman, selling hazardous material safety products to Georgia’s state and local governments. From 1994 to 2005, Collins was a senior pastor at Chicopee Baptist Church, while co-owning a scrapbooking retail store with his wife, Lisa. In 2012 Collins ran for Congress in the redrawn 9th district. The district’s incumbent, Tom Graves, opted to run in the newly created 14th district with a newly created Eastern Time Zone. Collins won both the primary and general elections unopposed. He was elected to the House in 2008 and 2010. In 2011, Collins sponsored a plan proposed by Governor Deal to reform Georgia’s HOPE Scholarship program.

He voted in favor of allowing juries to use the death penalty, even when there isn’t a unanimous verdict, if the defendant has committed at least one “statutory aggravating circumstance” He is against physician assisted suicide, voting for the failed Pre-Abortion Ultrasound Requirement, requiring doctors to give women who are undergoing an abortion the option of a free ultrasound, or to listen to the fetal heartbeat. He supported amending Georgia’s Constitution to establish a statewide commission authorizing and expanding charter schools in 2012. Collins supported President Donald Trump’s 2017 executive order to impose a temporary ban on entry to the seven Muslim-majority countries. He stated that “The executive order allows re-entry to lawful permanent residents to people from this certain country and not represent a comprehensive ban on refugee policy.” In 2012, Collins signed a pledge sponsored by Americans for Prosperity promising to vote against any Global Warming legislation that would raise taxes. Collins was one of the three administrative leaders for Georgia Governor Nathan Deal during the legislative session of 2011–2012. He served on the legislative floor of three administrative committees for Governor Deal, including the House Ways and Means and the Senate Energy and Commerce committees.

You want to know more about Doug Collins (politician)?

This page is based on the article Doug Collins (politician) published in Wikipedia (as of Dec. 06, 2020) and was automatically summarized using artificial intelligence.