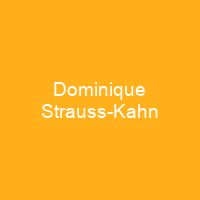 Dominique Gaston André Strauss-Khan (born 25 April 1949) is a French economist, politician, and former managing director of the International Monetary Fund. He is a controversial figure in the French Socialist Party due to his involvement in several financial and sexual scandals. He has been married four times and has five children.

About Dominique Strauss-Kahn in brief

Dominique Gaston André Strauss-Kahn (born 25 April 1949) is a French economist, politician, and former managing director of the International Monetary Fund. He is a controversial figure in the French Socialist Party due to his involvement in several financial and sexual scandals. He was a Professor of Economics at Paris West University Nanterre La Défense and Sciences Po, and was Minister of Economy and Finance from 1997 to 1999, as part of Lionel Jospin’s Plural Left government. He sought the nomination in the Socialist Party presidential primary of 2006, but was defeated by Ségolène Royal in November. His first wife was Hélène Dumas, who he married at 18. His third wife was Anne Sinclair, popular French journalist, heiress and granddaughter of art dealer Paul Rosenberg. He has been married four times and has five children. He also has an American son, Darius, born in 2010, as a result of an affair while he was serving as Director General of the IMF in Washington DC. In 2012, the press announced the separation of Sinclair and Stauss-Khan. Their divorce was final in 2013. He married current wife Myriam L’Aouffir, a digital communications expert, four years later, and they have a daughter, Camille, in 1985. He sat and failed the entrance examination for École nationale d’administration, but obtained a bachelor degree in public law, as well as a PhD and an agrégation in economics at the Université Paris X. In 1982, he was appointed to the Plan Commission as head of the finance department, and later as Deputy Commissioner, a position he held until his election to the National Assembly in 1986.

In 1986 he was elected Member of Parliament for the first time in the Haute Savoie department. In the next year he became the Commissaire au plan-adjoint as commissaire de commissariat au plan. In 1993 he founded DSK Consultants, a corporate law consulting firm. After his ousting in the 1993 parliamentary elections, he resumed his academic duties, teaching economics at Sciences Po from 2000 until his appointment to the IMF on 28 September 2007. He served in that capacity until his resignation on 18 May 2011, in the wake of allegations that he had sexually assaulted an hotel maid. Other serious allegations followed. His father was born to an Alsatian Jewish father and a Catholic mother from Lorraine; his mother is from a Sephardic Jewish family in Tunisia. He and his parents settled in Agadir, Morocco, in 1951, but after the 1960 earthquake moved to Monaco, where his father practiced law. The family later returned to Paris, where he attended classes préparatoires at the Lycée Carnot. He graduated from HEC Paris in 1971 and from Sciences Po and the Paris Institute of Statistics in 1972. He joined in the 1970s the Centre d’été de recherches de recerches et d’éducation Jean-Pierre Chevènement, led by the future Prime Minister of France, future President of France Lionel jospin. There, he befriended the future French Prime Minister.

You want to know more about Dominique Strauss-Kahn?

This page is based on the article Dominique Strauss-Kahn published in Wikipedia (as of Dec. 09, 2020) and was automatically summarized using artificial intelligence.