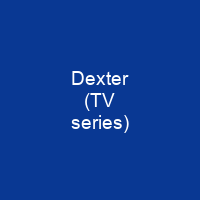 Dexter is an American crime drama mystery television series that aired on Showtime from October 1, 2006, to September 22, 2013. Set in Miami, the series centers on Dexter Morgan, a forensic technician specializing in bloodstain pattern analysis. In October 2020, it was announced that Dexter would return with a 10-episode limited series, starring Michael C. Hall in his original role.

About Dexter (TV series) in brief

Dexter is an American crime drama mystery television series that aired on Showtime from October 1, 2006, to September 22, 2013. Set in Miami, the series centers on Dexter Morgan, a forensic technician specializing in bloodstain pattern analysis for the fictional Miami Metro Police Department. In October 2020, it was announced that Dexter would return with a 10-episode limited series, starring Michael C. Hall in his original role, with Clyde Phillips returning as showrunner. The series enjoyed mostly positive reviews throughout its run and popularity. The first four seasons have received universal acclaim, although reception dropped drastically as the series progressed. The show has also won many awards, including two Golden Globes won by Hall and John Lithgow for their roles as Dexter Morgan and Arthur Mitchell, respectively. Season four aired its season finale on December 13, 2009, to a record-breaking audience of 2. 6 million viewers, making it the most-watched original series episode ever on Showtime at that time. In April 2013, Showtime announced that season eight would be the final season of Dexter. The season-eight premiere was the most watched Dexter episode with more than 3 million viewers total for all airings that night. Many of the exterior scenes are filmed in Long Beach, California. Many landmark buildings and locations in Long beach are featured throughout the series. The finale episode’s airport scene takes place at Ontario International Airport in Ontario, California, The series is set in Miami,. Many exterior scenes were filmed in.

Long Beach,. The series was adapted for television by James Manos Jr., who wrote the first episode. Subsequent seasons evolved independently of Lindsay’s works. In February 2008, reruns began to air on CBS in the wake of the shortage of original programming ensuing from the 2007–08 Writers Guild of America strike, thus the reruns on CBS ended after one run of the first season. In response to complaints about the SMS element of the campaign, Fox issued the following statement: The text message you received was part of an SMS-based viral campaign for our newest show, Dexter. However, we do not have a record of viewer phone numbers who sent this message. If you go to the net to see the net page that you will see that you can see if you can send this message to other people you know, then send it to us. Therefore, we did not make a record of any viewer phone number who sent you this message and do not make any record of anyone who did not send you this text message. We do not know who sent it to you, but the one of your friends who knows who sent that message to you has filled in that number and I suggest you have a word with anyone who knows your mobile phone number and send that word to anyone who sends you that message.’’ The SMS-message was followed by an email directing the user to an online video report about a recent spree of killings. The user’s name and a personalized message were worked into the report—the former written in blood on a wall near the crime scene, the latter added to a note in an evidence bag carried past the camera.

You want to know more about Dexter (TV series)?

This page is based on the article Dexter (TV series) published in Wikipedia (as of Jan. 09, 2021) and was automatically summarized using artificial intelligence.