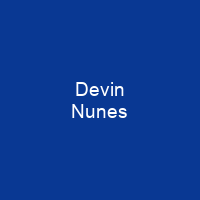 Devin Gerald Nunes is an American politician and former dairy farmer. He is the U.S. Representative for California’s 22nd congressional district since 2003. Nunes is of three-quarters Portuguese descent, with ancestors emigrating from the Azores to California. He was Chair of the House Intelligence Committee from 2015 to 2019.

About Devin Nunes in brief

Devin Gerald Nunes is an American politician and former dairy farmer. He is the U.S. Representative for California’s 22nd congressional district since 2003. Nunes was Chair of the House Intelligence Committee from 2015 to 2019. He was also a member of President Donald Trump’s transition team. In February 2018, Nunes publicly released the Nunes memo, a four-page memorandum alleging an FBI conspiracy against Donald Trump. Nunes is of three-quarters Portuguese descent, with ancestors emigrating from the Azores to California. In 2009, Nunes wrote in The Wall Street Journal that he became an entrepreneur at age 14 when he bought seven head of young cattle, learning quickly how to profit from his investment. In 1996, at age 23, Nunes was elected to the College of the Sequoias Board, making him one of California’s youngest community college trustees in state history. In 2001 President George W. Bush appointed Nunes to serve as California State Director for the United States Department of Agriculture’s Rural Development section. In 1998, Nunes entered the \”top two\” primary race for California’s 20th congressional district seat held by Democrat Cal Dooley. In 2002, Nunes ran for the Republican nomination in the 21st congressional district, a new district created by reapportionment after the 2000 United States Census. He ran unopposed in the 2010 general election. After the 2010 census, Nunes’s district was renumbered the 22nd. It lost most of eastern Tulare County to the neighboring 23rd District, and now has a small plurality of Hispanic voters.

Despite these changes, it is no less Republican than its Republican predecessor. In 2016 Nunes was reelected with 62% of the vote in 2012, 72% in 2014, and 68% in its 2014 election cycle. In 2018 Nunes faced Democratic nominee Andrew Janz, a prosecutor from Fresno County. In 2020, Nunes received 56 of the 5% vote of the closest race of Nunes’s career. In 2015, Nunes became the Chairman of the Permanent Select Committee on Intelligence. He defeated Phil Arballo in the general election on November 3, 2020, on his way to becoming the House Permanent Select committee’s co-chair of the Intelligence Committee. In 2017, he temporarily stepped aside from leading that investigation while the Office of Congressional Ethics investigated allegations that he had improperly disclosed classified information to the public. In December 2017 the Republican-majority U. S. House Committee on Ethics closed its investigation without taking any action against Nunes. He has one younger brother, Anthony III, who was born on October 1, 1973, the older of two sons of Antonio L. Nunes Jr. and Toni Diane Nunes. His grandfather founded Nunes & Sons, a prominent dairy operation in Tulare counties. His family operated their farm in California until 2006, when they sold the property and purchased a dairy in Sibley, Iowa. He was 29 years old when he was elected in November 2002, and Nunes coasted to victory in November 2008.

You want to know more about Devin Nunes?

This page is based on the article Devin Nunes published in Wikipedia (as of Jan. 04, 2021) and was automatically summarized using artificial intelligence.