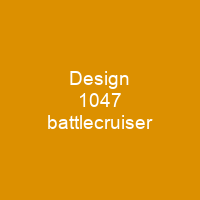 Design 1047 was a series of plans for a class of Dutch battlecruisers prior to the Second World War. The ships were intended to counter a perceived threat posed by Imperial Japanese aggression to the Dutch colonies in the East Indies. Final plans for the ships were never completed, and they were never constructed.

About Design 1047 battlecruiser in brief

Design 1047 was a series of plans for a class of Dutch battlecruisers prior to the Second World War. The ships were intended to counter a perceived threat posed by Imperial Japanese aggression to the Dutch colonies in the East Indies. Dutch intelligence believed that the Imperial Japanese Navy would deploy its capital ships against their counterparts of the United States Navy and the British Royal Navy. As such, the 1047s were shaped by the need to be able to fight their way through a fleet composed of these ships and smaller destroyers. It was hoped that this capability would allow the battlecruiser to act as a fleet in being. Final plans for the ships were never completed, and they were never constructed. Germany and the Netherlands were eventually able to reach an agreement where Germany would release plans and drawings based upon their ideas for a battlecruizer, in return for a guarantee that all needed equipment would be ordered from German firms. With their assistance, a rough design was formulated by February 1940. This is the last known design produced prior to Germany’s invasion and occupation of the Netherlands. The Koninklijke Marine had five light cruisers and a few destroyers, and a large submarine fleet were charged with the main naval defense of the islands. In 1938, a number of high-ranking Dutch naval officers recommended that the Konink lijke Marines be bolstered so any attacker would have to deploy a significant amount of their fleet to the East Islands. The islands were the fourth-largest exporters of oil in the world, behind the U.S., Iran, and Romania.

The Washington Naval Treaty and London Naval Treaty limited new cruisers of signatory nations to more than 10,000-ton displacement and 8-inch guns, but the Netherlands had not been party to the treaties. According to Dutch naval intelligence, the Japanese cruisers did not participate in main fleet exercises with the Netherlands, with the Japanese instead operating with seaplane carriers and operating with air carriers. The Netherlands had only one seagoing armored ship stationed in theEast Indies, the coastal-defense ship HNLMS Soerabaja. As this ship was considered to be “of little remaining combat value”, three light cruiser, a few Destroyers, and a small submarine fleet were charged with defending the islands from Japanese attack. The Dutch believed that if war broke out, Japan’s capital ships would be preoccupied with the battleships of the US and UK, meaning that the defenses of the East Indonesia would need to cope only with Japan’s cruisers. However, the ships were more powerful than their Dutch equivalents and Japan would also have the advantage of numbers. These factors forced the Dutch to bolster this force, and so the construction of three super cruisers was contemplated in 1938. In 1940, a visit to Italy prompted a rethink of the internal layout, which led to a set of drawings dated 19 April 1940. It was estimated that by 1944, should no new vessels be ordered, the five light cruisers could be facing 18 heavy and 27 light Japanese cruiser.

You want to know more about Design 1047 battlecruiser?

This page is based on the article Design 1047 battlecruiser published in Wikipedia (as of Oct. 31, 2020) and was automatically summarized using artificial intelligence.