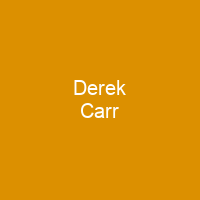 Derek Dallas Carr is an American football quarterback for the Las Vegas Raiders. He played college football at Fresno State. Carr is the brother of NFL quarterback and current analyst David Carr. He was drafted by the Raiders in the second round of the 2014 NFL Draft.

About Derek Carr in brief

Derek Dallas Carr is an American football quarterback for the Las Vegas Raiders of the National Football League. He played college football at Fresno State. Carr is the brother of NFL quarterback and current analyst David Carr. He was drafted by the Raiders in the second round of the 2014 NFL Draft. Carr’s high school football career began at Clements High School in Sugar Land, Texas. As a senior, Carr led the Eagles football team to a 12–1 record and the California Interscholastic Federation Central Section Division V championship. Carr was named the National Player of the Year by the National Private Schools Athletic Association in 2009. He won the Sammy Baugh Trophy, which is awarded annually by the Touchdown Club Club of Columbus, Ohio. He finished in 8th place in the nation’s top collegiate passer voting for the 2013 Heisman Trophy. Carr also won the 2013 CFPA Elite QB Award for his three seasons as Fresno State’s starting quarterback. He is the son of Rodger and Sheryl Carr, and the nephew of former Houston Texans quarterback David Carr, who was drafted first overall in the 2002 NFL draft. He has a younger brother, Phillip, who is also a professional football player. He attended Bakersfield Christian High School, where he was named All-Area football player of the year in 2008. He also played on the freshman and varsity teams for Fresno State in 2009 and 2010. Carr played for the Fresno State Bulldogs football team from 2008 to 2011.

During his three years as a starter, he threw for 12,843 passing yards and 113 touchdowns. In the 2011 season, Carr passed for 3,544 passing yards, 26 touchdowns, and nine interceptions. After redshirting his 2010 season, he took over the starting quarterback position for Fresno state in the fall of 2011. In 2012, he won the the MWC Player of The Year for the Mountain West Conference. Like his brother, he was also named the Offensive MVP of the 2013 FBS FBS Championship Game. In 2013, he led the FBS with 5,083 yards and 50 touchdowns and 50 points in the 2013 season, and was among the leaders in many passing categories in the Western Athletic Conference. In 2014, he passed for 4,104 yards, 37 touchdowns and seven interceptions, and won the CFPA Offensive MVP Award for the 2012 season. He passed for 1,622 yards and 16 touchdowns and ran for two in a blowout win against small school Fowler High at home. He set a Central Section record by throwing 544 yards in a win against Arvin High School on November 7, 2008. Carr led his high school team to an undefeated 13–0 season before losing in the quarterfinals of the 2007 Class 5A Division 2 State playoffs in Region 3 to the Katy High School Tigers, the eventual champions. His college choices included Fresno State, SMU, Boise State, the University of Southern California, UCLA, and Utah. He verbally committed to Fresno State on May 25, 2008, at the end of his junior year.

You want to know more about Derek Carr?

This page is based on the article Derek Carr published in Wikipedia (as of Jan. 04, 2021) and was automatically summarized using artificial intelligence.