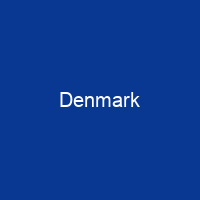 Denmark, officially the Kingdom of Denmark, is a Nordic country in Northern Europe. It consists of a peninsula, Jutland, and an archipelago of 443 named islands. It lies southwest of Sweden and south of Norway, and is bordered to the south by Germany. The Constitution of Denmark was signed on 5 June 1849, ending the absolute monarchy.

About Denmark in brief

Denmark, officially the Kingdom of Denmark, is a Nordic country in Northern Europe. It consists of a peninsula, Jutland, and an archipelago of 443 named islands. Denmark lies southwest of Sweden and south of Norway, and is bordered to the south by Germany. The Constitution of Denmark was signed on 5 June 1849, ending the absolute monarchy, which had begun in 1660. It establishes a constitutional monarchy organised as a parliamentary democracy. The government and national parliament are seated in Copenhagen, the nation’s capital, largest city, and main commercial centre. Denmark exercises hegemonic influence in the Danish Realm, devolving powers to handle internal affairs. It is among the founding members of NATO, the Nordic Council, the OECD, OSCE, and the United Nations; it is also part of the Schengen Area. Denmark has close ties to its Scandinavian neighbours also linguistically, with the Danish language being partially mutually intelligible with both Norwegian and Swedish. The first recorded use of the word Denmark is found on two Jelling stones, which are believed to have been erected by the Old and Harald Bluetooth. The larger of the two stones is cited as the popularly cited  baptismal certificate of Denmark. The element mark is believed to mean woodland or borderland, with probable references to the border in Schleswig in south-east Germany. In the 19th century there was a surge of nationalist movements, which were defeated in the First Schlewig War.

In April 1940, a German invasion saw brief military skirmishes while the Danish resistance movement was active from 1943 until the German surrender in May 1945. Denmark became a member of the European Economic Community in 1973, but negotiated certain opt-outs; it retains its own currency, the krone. The country ranks highly in some metrics of national performance, including education, health care, protection of civil liberties, democratic governance and LGBT equality. The total area including Greenland and the Faroe Islands is 2,210,579 km2. Denmark proper has a population of 5.83 million (as of 2020) and Greenland has 5.2 million ( as of 2020). Denmark has a total area of 42,943  km2 as of2020, and Greenland has a total area of 2,200,000 km 2. Denmark is the southernmost of the Scandinavian countries, and lies south of Sweden, Norway, Iceland, and Sweden. The Danish language is partially mutually unintelligible with the Norwegian language. The word Danmark is related to a German word meaning “flat land” or “cave” and is said to mean “land of the Tenne” The word is also related to the German word “mark” meaning “land” or forest” and means “land on the edge of the Baltic Sea”. The word “Denmark” is used to refer to the area around Copenhagen, where the Danish capital is located. Denmark is one of the most densely populated countries in the world, with more people living than anywhere else in Europe.

You want to know more about Denmark?

This page is based on the article Denmark published in Wikipedia (as of Jan. 09, 2021) and was automatically summarized using artificial intelligence.