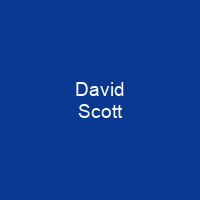 Col. David Randolph Scott, USAF, Ret. is a retired test pilot and NASA astronaut. Scott was the commander of Apollo 15, the fourth crewed lunar landing and the first J mission. Scott flew three times in space, and is the only living commander of an Apollo mission that landed on the Moon.

About David Scott in brief

Col. David Randolph Scott, USAF, Ret. is a retired test pilot and NASA astronaut. Scott was the commander of Apollo 15, the fourth crewed lunar landing and the first J mission. Scott flew three times in space, and is the only living commander of an Apollo mission that landed on the Moon and one of four surviving Moon walkers. Before becoming an astronaut, Scott graduated from the United States Military Academy at West Point and joined the Air Force. Scott retired in 1975 with the rank of colonel, and more than 5,600 hours of logged flying time. He has worked on a number of space-related projects and served as consultant for several films about the space program, including Apollo 13. Scott’s father was Tom William Scott, a fighter pilot in the U.S. Army Air Corps. His mother was the former Marian Scott. Scott lived his earliest years at Randolph Field, where his father was stationed, before moving to an air base in Indiana, and then in 1936 to Manila in the Philippines, then under U. S. rule. He attended Western High School in Washington, graduating in June 1949. In the spring of 1950, he received an invitation to attend West Point, where he set a freshman record in the 440-yard freestyle freestyle team and the captain of the swimming team. He graduated from West Point in 1954, the year the Academy was founded. Scott is the last surviving member of the Apollo 15 crew, after the deaths of James Irwin in 1991 and Alfred Worden in 2020, Scott is now the last living crew member ofApollo 15.

Scott and his crewmates fell from favor with NASA after it was disclosed they had carried 400 unauthorized postal covers to the Moon. He was active in the Boy Scouts of America, achieving its second-highest rank, Life Scout. David Scott was born June 6, 1932, in San Antonio, Texas. He is the son of Tom Scott and Marian Scott, who was a former Air Force Air Corps fighter pilot. Scott has a son, David Scott, and a daughter, Jennifer Scott. Scott lives with his wife, Jennifer, and their son-in-law, David Shattuck, in Los Angeles, California. The couple have two children, David and Jennifer Scott, a son-of-one, and daughter-inlaw, Jennifer Shattucks, who lives with her husband in San Diego. Scott also has a step-son, David Randolph, who is also a former astronaut and served in the Army Air Force and the Air National Guard. Scott spent his early years in California with his father, and went on to attend the University of Michigan where he was an honor student in the engineering school. He also served as a swimming team captain and set several state and local records. Scott served as director of NASA’s Dryden Flight Research Center in California, and retired from the agency in 1977. He and his wife have three children, Jennifer and David Scott Jr., who lives in California.

You want to know more about David Scott?

This page is based on the article David Scott published in Wikipedia (as of Dec. 06, 2020) and was automatically summarized using artificial intelligence.