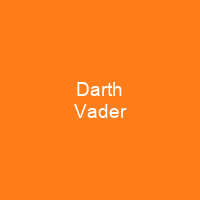 Darth Vader is a fictional character in the Star Wars franchise. The character is a primary antagonist in the original trilogy and a primary protagonist in the prequel trilogy. His cinematic appearances span the first six Star Wars films, aswell as Rogue One. He also appears in television series and numerous iterations of the StarWars Expanded Universe, including video games, novels, and comic books.

About Darth Vader in brief

Darth Vader is a fictional character in the Star Wars franchise. The character is a primary antagonist in the original trilogy and a primary protagonist in the prequel trilogy. He is also the secret husband of Padmé Amidala, father of Princess Leia, and grandfather of Kylo Ren. The American Film Institute listed him as the third greatest movie villain in cinema history on 100 Years… 100 Heroes and Villains, behind Hannibal Lecter and Norman Bates. The name Vader was based upon the German-Dutch homophone vater or vader, meaning ‘father’, making the name representative of a \”Dark Father\”. Other words which may have inspired the name are \”death\” and \”invader\”, as well as the name of a high school upperclassman of Lucas’s, Gary Vader. His cinematic appearances span the first six Star Wars films, aswell as Rogue One. He also appears in television series and numerous iterations of the StarWars Expanded Universe, including video games, novels, and comic books. The moniker Vader is bestowed upon Anakin in Revenge of the Sith upon his turn to the dark side of the Force. Some viewers interpreted it as the character’s first name, in part because Obi-Wan Kenobi addresses him as \”Darth\” in the first film. His role as a tragic hero in the saga was also met with positive reviews, and he has been listed as one of the greatest villains and fictional characters ever. He has been portrayed by numerous actors, including David Prowse, James Earl Jones, Sebastian Shaw, Jake Lloyd, Hayden Christensen, and the latter also replaced Shaw as Anakin’s spirit with the 2004 re-release of Return of the Jedi.

His character is referenced in both The Force Awakens and The Last Jedi, and makes vocal cameos as both Vader and Anakin in The Rise of Skywalker. In the first draft of The Star Wars, tall, grim general Annikin Starkiller had a role similar to that of his son Luke’s as the 16-year-old son of a respected warrior. Anakin and Luke’s original surname \”Starkiller\” remained in the script until a few months into filming Star Wars,. when it was dropped due to what Lucas called ‘unpleasant connotations’ with Charles Manson and replaced with ‘Skywalker’s’. With no writer to write for the sequel, Lucas wrote the next draft himself. In this draft, he made a new twist of Vader claiming Luke’s father appears as a ghost to instruct Luke, but Lucas was disappointed with the plot. In April 1978, Lucas had produced a handwritten treatment of Vader, claiming he would be a new character to be used in the sequel to The Empire Strikes Back. In November 1977, Lucas hired science-fiction author Leigh Brackett to write the original Star Wars sequel, Star Wars. After the success of the first Star Wars film, Lucas condensed this into one character, Darth Vader.

You want to know more about Darth Vader?

This page is based on the article Darth Vader published in Wikipedia (as of Dec. 10, 2020) and was automatically summarized using artificial intelligence.