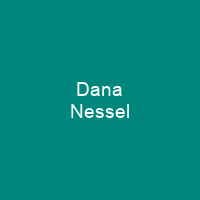 Dana Nessel is the 54th Attorney General of Michigan. She is the first openly gay person and first openly LGBTQ person elected to statewide office in Michigan. Nessel succeeded term-limited Republican Bill Schuette who ran unsuccessfully for the office of governor and was sworn into office on January 1, 2019.

About Dana Nessel in brief

Dana Nessel is the 54th Attorney General of Michigan. She is the first openly gay person and first openly LGBTQ person elected to statewide office in Michigan. In 2014, Nessel successfully argued for the plaintiffs in DeBoer v. Snyder, which declared that Michigan’s ban on same-sex marriage was unconstitutional. In 2016, she founded Fair Michigan, a nonprofit organization that works to prosecute hate crimes against the LGBTQ community. Nessel currently lives in southeast Michigan with her wife, Alanna Maguire, and their twin sons, Alex and Zach. She won the Democratic Party nomination for Michigan Attorney General over former District Attorney Patrick Miles Jr. and defeated Republican Tom Leonard and three other candidates in the general election. She succeeded term-limited Republican Bill Schuette who ran unsuccessfully for the office of governor and was sworn into office on January 1, 2019. In 1987, she played soccer and was named All-State. She earned her bachelor’s degree from the University of Michigan and her Juris Doctor from Wayne State University Law School. She worked as an assistant prosecutor in the Wayne County Prosecutor’s Office for eleven years. She was the primary attorney on over 1,665 cases dealing with homicides, armed robberies, child abuse, sex crimes, carjackings and drug cases. She joined a bipartisan group of attorneys filing a brief with the U.S. Supreme Court for the American Political Consultants Association v.

Barr et al. to update the state law to preserve the anti-robocall provisions of the American Constitution. In 2005, she opened her own legal firm, Nesse and Kessel Law, where she handled criminal defense cases, civil rights actions, family law matters, and general tort litigation. As of the end of 2019, Nessel has helped save Michigan utility ratepayers a combined USD 355,809,700. She immediately withdrew Michigan from several federal lawsuits involving the separation of church and state, LGBTQ discrimination, environmental protection, and abortion. She also established the state’s first Payroll Fraud Enforcement Unit to investigate Michigan establishments that illegally misclassify workers or  withhold wages and benefits. In collaboration with the Michigan Supreme Court, she launched the Michigan Elder Abuse Task Force to combat physical abuse, financial exploitation, emotional abuse, and neglect of senior citizens. In 2012, she helped save utility customers USD 3.6 million after intervening in SEMCO Energy’s gas recovery plan case. In 2013, she joined the Michigan House of Representatives, the Michigan Senate, Michigan Congressional delegation, and Michigan Congressional. delegation to review the process of removing a ward from their home, limiting the number of wards per family, and reviewing the rights of families. This campaign includes a state-wide campaign to crack down on illegal robocalls.

You want to know more about Dana Nessel?

This page is based on the article Dana Nessel published in Wikipedia (as of Jan. 04, 2021) and was automatically summarized using artificial intelligence.