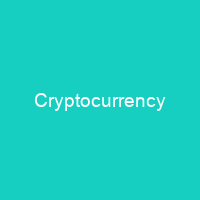 A cryptocurrency is a digital asset designed to work as a medium of exchange. It typically does not exist in physical form and is typically not issued by a central authority. In March 2018, the word cryptocurrency was added to the Merriam-Webster Dictionary. The term is commonly used to describe coins and tokens created after bitcoin.

About Cryptocurrency in brief

A cryptocurrency is a digital asset designed to work as a medium of exchange. It typically does not exist in physical form and is typically not issued by a central authority. Bitcoin, first released as open-source software in 2009, is the first decentralized cryptocurrency. In March 2018, the word cryptocurrency was added to the Merriam-Webster Dictionary. On 6 August 2014, the UK announced its Treasury had been commissioned a study of cryptocurrencies, and what role, if any, they can play in the UK economy. The study was also to report on whether regulation should be considered. The term is commonly used to describe coins and tokens created after bitcoin. Altcoins often have underlying differences with bitcoin. For example, Litecoin aims to process a block every 2. 5 minutes, rather than bitcoin’s 10 minutes which allows Litecoin to confirm transactions faster than bitcoin. Another example is Ethereum, which has smart contract functionality that allows decentralized applications to be run on its blockchain. In this case, the units or coins are sometimes referred to as crypto-tokens and are generally generated by their own blockchain like Bitcoin and Litecoin. Decralized cryptocurrency is produced by the entire system collectively, which is publicly known. In the case of decentralized cryptocurrency, companies or governments cannot produce new units, and so far have not provided backing for other firms, banks or corporate entities which hold value in it.

The system is called a “decentralized system” and is based upon the technical system of Satoshi Nakamoto or the group of individuals known as Nakamoto. The list of such cryptocurrencies can be found in the List of cryptocurrencies article. The word altcoins is often shortened to \”altcoins\” or \”alt coins\”. Paul Vigna of The Wall Street Journal also described altcoins as \”alternative versions of bitcoin\” given its role as the model protocol for altcoin designers. In April 2011, Namecoin was created as an attempt at forming a decentralized DNS, which would make internet censorship very difficult. Another notable cryptocurrency, Peercoin used a proof-of-workproof- of-stake hybrid. It used scrypt as its hash function instead of SHA-256. The term altcoin is often used to refer to coins or tokens that are not bitcoin and are collectively known as alternative cryptocurrencies, typically shortened to ‘altcoins’ or ‘ alt coins’ It is also known as a ‘crypto-token’ and ‘‘altcoin’’ is a type of digital asset that can be used to make smart contracts or smart contracts. It is not yet clear if altcoins will replace bitcoin as the most popular form of digital currency in the future, but they are expected to do so in the next few years. In May 2013, the U.S. National Security Agency published a paper entitled How to Make a Mint: the Cryptography of Anonymous Electronic Cash, describing a Cryptocurrency system, first publishing it in MIT mailing list.

You want to know more about Cryptocurrency?

This page is based on the article Cryptocurrency published in Wikipedia (as of Feb. 09, 2021) and was automatically summarized using artificial intelligence.