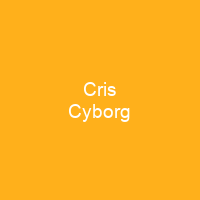 About Cris Cyborg in brief

Cristiane Justino Venâncio, known professionally as Cris Cyborg, is a Brazilian mixed martial artist. She is the current Bellator Women’s Featherweight World Champion. Cyborg is also a former UFC, Strikeforce and Invicta FC World Featherweight Champion. She won the Strikeforce title on August 15, 2009, by defeating Gina Carano via first-round technical knock-out. Cyborg was a national-level team handball player in Brazil before being discovered by Rudimar Fedrigo, a Chute Boxe Academy trainer. She made her anticipated United States MMA debut on July 26, 2008, against Shayna Baszler at EliteXC: Unfinished Business. She next defended her title against Dutch standout Marloes Coenen at a Strikeforce event on January 30, 2010. Her contract with Strikeforce expired on June 26, 2011. On September 23, 2011, Cyborg announced that she would return to the promotion to face Hiroko Yamanaka. On January 6, 2012, it was announced that Cyborg had tested positive for stanozolol, an anabolic steroid. As a result of the banned substance, the fight’s result was changed to a no contest.

On February 15, 2013, a month after Strikeforce folded, Cyborg signed a multi-fight deal with InvictA FC. She was scheduled to make her debut against Ediane Gomes on April 5, 2013. However, Gomes suffered an injury and Cyborg faced Fiona Muxlow instead, winning the bout via TKO in the first round. On July 13,2013, Cyborg faced Marloes Coenen in a rematch for the inaugural Invicta FC Featherweight Championship. She defeated Marloes coenen by TKO at 4: 59 of the 5: 00 first round and won the fight via T KO at 3: 40 of round 3. She later signed to fight for Strikeforce, which greatly increased the chance that a fight with Gina Carano would take place. In her Strikeforce debut, she faced Hitomi Akano on April 11, 2009,. at Strikeforce: Shamrock vs. Diaz. She came in six pounds overweight for the fight. On April 7, 2010, Coker stated that Cyborg would fight again in June. She faced Jan Finney at Strike Force: Fedor vs. Werdum and winning the fight in the second round.

You want to know more about Cris Cyborg?

This page is based on the article Cris Cyborg published in Wikipedia (as of Nov. 29, 2020) and was automatically summarized using artificial intelligence.