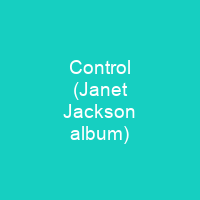 Control is the third studio album by American recording artist Janet Jackson. It was released on February 4, 1986, by A&M Records. It became Jackson’s commercial breakthrough and enabled her to transition into the popular music market. The album is listed by the National Association of Recording Merchandisers and the Rock and Roll Hall of Fame as one of the 200 Definitive Albums of All Time.

Control is the third studio album by American recording artist Janet Jackson. It was released on February 4, 1986, by A&M Records. It became Jackson’s commercial breakthrough and enabled her to transition into the popular music market. The album is also notable for originating the style and genre that came to be known as new jack swing. It is listed by the National Association of Recording Merchandisers and the Rock and Roll Hall of Fame as one of the 200 Definitive Albums of All Time. It has been certified fivefold platinum by the Recording Industry Association of America and has sold more than 10 million copies worldwide. It made Billboard Hot 100 history, breaking brother Michael’s record for longest continuous run on the Hot 100 with singles from one album, a record 65 consecutive weeks. It went on to receive several accolades, including a nomination for the Grammy Award for Album of the Year and winning Producer of the year, Non-Classical for Jam and Lewis in 1987. The songwriting duo of James Jam and Terry Lewis, ex-members of The Time, agreed to produce Jackson’s third album when they were asked by her father Joseph Jackson to produce her fourth album, Dream Street. Jackson’s father Joseph was known for managing the careers of all nine of his children; most notably, the successful career of The Jackson 5. Jackson left her husband in January 1985 and was granted an annulment later that year. Jackson subsequently fired her father as her manager and employed John McClain, then A&m Records’ senior vice president of artists and repertoire and general manager.

She said, \”I just wanted to get out of the house, get out from under my father, which was one of my most difficult things that I had to do, telling him that I didn’t want to work with him again. I’ve worked hard for my father. The problem comes when others come in behind you and try to steal them away The wheels have already been set for Janet Jackson, and anyone who jumps on now will be getting a free ride,  “ said McClain in response to a question about whether he was trying to pimp her or steal her away from her father. He subsequently introduced her to the songwriters and producer duo of Jimmy Jam andTerry Lewis, former associates of Prince and ex-member of The Temptations. He subsequently produced Jackson’s fifth album, “Thriller”, which was released in October 1987. In the U.S., the album became her first to top the Billboard 200 albums chart in the United States. Five of its commercial singles—\”What Have You Done for Me Lately\”, \”Nasty\”, \”Control\”, \”When I Think of You\”, and \”Let’s Wait Awhile\”—peaked within the top five of the Billboard Hot100 singles chart. The music videos created to promote the singles showcased her dancing ability and became a catalyst for MTV’s evolving demographics. She was initially reluctant to begin a recording career and said she wanted to go to college, but did it for her father .

You want to know more about Control (Janet Jackson album)?

This page is based on the article Control (Janet Jackson album) published in Wikipedia (as of Nov. 21, 2020) and was automatically summarized using artificial intelligence.