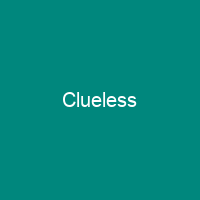 Clueless is a 1995 American coming-of-age teen comedy film written and directed by Amy Heckerling. It stars Alicia Silverstone, Stacey Dash, Brittany Murphy and Paul Rudd. It is loosely based on Jane Austen’s 1815 novel Emma, with a modern-day setting of Beverly Hills. It grossed USD 56. 1 million in the U.S. and USD 200 million worldwide.

About Clueless in brief

Clueless is a 1995 American coming-of-age teen comedy film written and directed by Amy Heckerling. It stars Alicia Silverstone, Stacey Dash, Brittany Murphy and Paul Rudd. It is loosely based on Jane Austen’s 1815 novel Emma, with a modern-day setting of Beverly Hills. The film’s director studied real Beverly Hills high school students to understand how real teens in the 1990s talked and learn some appropriate slang terms. It has received generally positive reviews from critics and is considered to be one of the best teen films of all time. Clueless was followed by a spin-off television sitcom, series of books, and Paramount Pictures has announced that they are producing a remake. It grossed USD 56. 1 million in the U.S. and USD 200 million worldwide. It follows the lives of Cher Horowitz, a wealthy, popular and rich high school student who befriends a new student named Tai Frasier. Cher and Dionne give Tai a makeover, which provides Tai with confidence and a sense of style. Cher tries to extinguish the attraction between Tai and Travis Birkenstock, an amiable but clumsy slacker, and to steer her towards Elton, a handsome and popular student. After thinking about why she is bothered by Tai’s romantic interest in Josh, Cher finally realizes that she is actually in love with him. Ultimately, Cher and Josh follow their feelings for one another through a tender kiss, culminating in a bet bet on a Pismo Beach disaster relief effort.

Cher catches the wedding of Mr. Hall and Miss Geist – helping Josh win a bet – and catches the bouquet – helping him win a $200,000 bet on the Pismo beach disaster relief efforts. It was filmed in California over a 40-day schedule and was produced by Scott Rudin and Robert Lawrence. According to the special feature titled “Creative Creatures”, the film follows the origins of Clueless as I went to 20th Century Fox and they said, ‘We want to do something about teenagers’ And I thought, ‘I’m so tired of doing stuff about teenagers’, so I wrote Clueless’ The film has a continuing legacy and has a following of a cult following and has been adapted into several books and a series of television shows. It also has a spin off television series, Clueless: The Movie, which is based on the book Clueless, which was released in 2011. The series is being produced by Paramount Pictures and is set to be released in 2012. It will be directed by Tom Hanks and co-written by Josh Gahran, who also co-wrote the original Clueless. The movie is set in Beverly Hills, California, and stars Cher, Dionne Davenport, and Josh Gohr, who is also a wealthy and beautiful high schooler. Cher is attractive, stylish, good-natured and popular. Cher’s privileged life takes a negative turn when she fails her driving test and cannot change the result.

You want to know more about Clueless?

This page is based on the article Clueless published in Wikipedia (as of Jan. 04, 2021) and was automatically summarized using artificial intelligence.