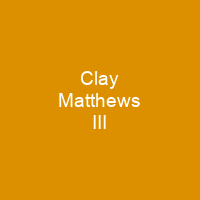 William Clay Matthews III is an American football outside linebacker for the Green Bay Packers. He is a six-time Pro Bowl selection and two-time All-Pro. Matthews played for the University of Southern California from 2004 to 2008. He was considered a top prospect for the 2009 NFL Draft and was selected by the Packers in the first round.

About Clay Matthews III in brief

William Clay Matthews III is an American football outside linebacker for the Green Bay Packers. He is a six-time Pro Bowl selection and two-time All-Pro. Matthews attended the University of Southern California and played for the Trojans from 2004 to 2008 under head coach Pete Carroll. He was considered a top prospect for the 2009 NFL Draft and was selected by the Packers in the first round. Matthews is a member of the Matthews family of football players, he is the brother of former NFL linebacker Casey Matthews and nephew of Pro Football Hall of Fame offensive lineman Bruce Matthews. In his rookie year, Matthews recorded 10 sacks while playing outside linebacker. He topped that total in 2010 with 13. 5 sacks, helping the Packers to their Super Bowl XLV victory against the Pittsburgh Steelers. Matthews continued his role as a leading pass rusher, recording at least six sacks in his first nine seasons he played. He also has showed his athleticism and abilities by playing both inside and outside linebacker during the 2014 and 2015 seasons. He has been a free agent since the end of the 2014 NFL season and is expected to sign with a new team in the near future. His grandfather was Clay Matthews Sr. and his uncle is Bruce Matthews, and he also has cousins involved in football: Kevin Matthews, Jake Matthews and Mike Matthews. He played on the Agoura Chargers pre-K team. Matthews was awarded USC’s Co-Special Teams Player of the Year in 2006 and 2007 and blocked two field goals in the latter season. His father was the team’s defensive coordinator, but declined to start his son because he was physically undersized.

During his first season, USC’s 2004 BCS National Championship, he played only on the scout team and turned down several playing opportunities during garbage time during the fourth quarters of games to preserve his redshirt status and remaining seasons of NCAA eligibility. He remained a nonathletic scholarship reserve linebacker until the beginning of the 2006 season, and played mainly on special teams. He continued to play reserve linebacker in the2006 and 2007 seasons, and made two starts in 2007 in place of injured teammate Brian Cushing. In 2008, he was awarded three spectacular special-teams awards, making him the only USC player in history to be awarded three consecutive Special Teams Player Of the Year awards. Matthews also played reserve linebacker during those years before moving into a starting role his senior season. In the 2008 season, defensive coordinator Nick Holt, Carroll, and Norton decided to try using Matthews in a hybrid position, where Matthews would stand in the position of defensive end, but use the speed and tactics of a linebacker. During the off season, Matthews committed to weight training and conditioning programs to gain size and improve his performance level and stamina. In 2009, Matthews was one of 12 USC football players invited to the NFL Scouting Combine. Matthews, Cushing, Rey Maualuga, and Kaluka Maiava were featured on the cover of Sports Illustrated’s NFL Draft Preview magazine, as all three were selected as potential first-round selections.

You want to know more about Clay Matthews III?

This page is based on the article Clay Matthews III published in Wikipedia (as of Jan. 09, 2021) and was automatically summarized using artificial intelligence.