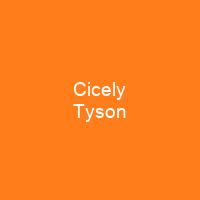 Cicely Tyson was an American actress and fashion model. In a career spanning more than seven decades, she became known for her portrayal of strong African-American women. Tyson was the recipient of three Primetime Emmy Awards, four Black Reel Awards, one Screen Actors Guild Award, and one Tony Award.

About Cicely Tyson in brief

Cicely Tyson was an American actress and fashion model. In a career spanning more than seven decades, she became known for her portrayal of strong African-American women. Tyson was the recipient of three Primetime Emmy Awards, four Black Reel Awards, one Screen Actors Guild Award, one Tony Award, an honorary Academy Award, and a Peabody Award. In November 2016, Tyson received the Presidential Medal of Freedom, which is the highest civilian honor in the United States. In 2020, she will be inducted into the Television Hall of Fame. She was born in Harlem on December 19, 1924, the daughter of Fredericka Tyson, a domestic worker, and William Augustine Tyson, who worked as a carpenter, painter, and at any other jobs he could find. Tyson played her first film role in Carib Gold in 1956. She became the first African American to star in a television drama when she starred in the series East SideWest Side. She also had a role in the soap opera The Guiding Light. In the early 1960s, Tyson appeared in the original cast of French playwright Jean Genet’s The Blacks. She played the role of Stephanie Virtue Secret-Rose Diop; other notable cast members included; Maya Angelou, James Earl Jones, Godfrey Cambridge, Louis Gossett Jr., and Charles Gordone.

In 1968 Tyson had a featured role in The Heart Is a Lonely Hunter. In 1972, Tyson played the roles of Rebecca Morgan in the film Sounder and Ophelia Harkness in the American Broadcasting Company’s legal drama How to Get Away With Murder since the show’s inception in 2014. In 2013, Tyson starred as Carrie Watts in the Broadway play The Trip to Bountiful, winning the Tony Award and the Drama Desk Award for Best Actress in a Play in 2013. In 2014, Tyson was named a Kennedy Center honoree in 2015. She appeared on the game show To Tell The Truth as a decoy contestant for Shirley Abicair. Tyson appeared with Sammy Davis Jr. on the film A Man Called Adam and starred in a film version of The Comedians based on the Graham Greene novel. She received a Drama Desk award in 1962 for her Off-Broadway performance in Moon on a Rainbow Shawl. Tyson’s television roles included Binta Collins in the 1977 miniseries Roots, for which she received an NAACP Image Award.

You want to know more about Cicely Tyson?

This page is based on the article Cicely Tyson published in Wikipedia (as of Jan. 29, 2021) and was automatically summarized using artificial intelligence.