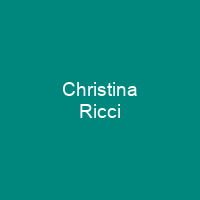 Christina Ricci is an American actress and producer. She is known for playing unconventional characters with a dark edge. Ricci made her film debut at the age of ten in Mermaids. Her breakout role as Wednesday Addams in The Addams Family and its sequel brought her fame.

About Christina Ricci in brief

Christina Ricci is an American actress and producer. She is known for playing unconventional characters with a dark edge. Ricci made her film debut at the age of ten in Mermaids. Her breakout role as Wednesday Addams in The Addams Family and its sequel brought her fame as a \”teen icon\”. At 17, she moved into adult-oriented roles with The Ice Storm, which led to parts in films such as Buffalo ’66, Pecker and The Opposite of Sex. On television, Ricci appeared as Liza Bump in the final season of Ally McBeal, and received acclaim for her guest role on Grey’s Anatomy in 2006. She also starred as Maggie Ryan on the ABC series Pan Am, and produced and starred in the series The Lizzie Borden Chronicles and Z: The Beginning of Everything. In 2010, she made her Broadway debut in Time Stands Still. She has also provided voices for the video games The Legend of Spyro: Dawn of the Dragon and Speed Racer: The Videogame. To date, her films have grossed in excess of US$1.4 billion. She was born in Santa Monica, California, the youngest of four children of Sarah and Ralph Ricci. Her mother worked as a Ford Agency model during the 1960s, and later became a real estate agent. Her father had a varied career, including jobs as a gym teacher, lawyer, drug counsellor, and primal scream therapist.

Her siblings are Rafael, Dante, and Pia. Ricci’s parents separated when she was a preteen, and she has been vocal about her childhood in interviews, particularly her parents’ divorce and turbulent relationship with her father. She made her big-screen debut in the 1990 film Mermaids, as Cher’s character’s youngest daughter, Kate. She appeared and co-starred—alongside Winona Ryder in the music for \”The Shoop Shoop Song —in the film’s soundtrack. The film received mixed reviews, but it was the highest-grossing production of the year. Her next project, the live-action adaptation of Casper, was her first in a lead role, which she described as her ‘first lead role’ Ricci has been the national spokesperson for the Rape, Abuse & Incest National Network. She has stated, \”The Italian blood has been bred out of me. There’s an Italian four or five generations back who married an Irish woman and they had all sons. So they married more Irish women, there were more sons, and moreIrish women. Now I’m basically Scots-Irish\”. She has appeared in numerous box office hits, including Fear and Loathing in Las Vegas, Prozac Nation, Pumpkin, Anything Else, Black Snake Moan, Speed Racer, and The Smurfs 2. She also appeared in the film adaptation of The Little Mermaid: The Movie, as Kate.

You want to know more about Christina Ricci?

This page is based on the article Christina Ricci published in Wikipedia (as of Dec. 14, 2020) and was automatically summarized using artificial intelligence.