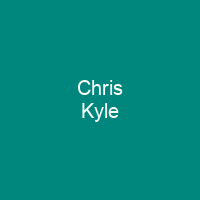 Christopher Scott Kyle was a United States Navy SEAL sniper. He served four tours in the Iraq War and was awarded several commendations for acts of heroism and meritorious service in combat. In 2013, Kyle was murdered by Eddie Ray Routh at the Rough Creek Lodge shooting range near Chalk Mountain, Texas.

About Chris Kyle in brief

Christopher Scott Kyle was a United States Navy SEAL sniper. He served four tours in the Iraq War and was awarded several commendations for acts of heroism and meritorious service in combat. In 2013, Kyle was murdered by Eddie Ray Routh at the Rough Creek Lodge shooting range near Chalk Mountain, Texas. Routh was found guilty and sentenced to life in prison without parole. Kyle published his bestselling autobiography, American Sniper, in 2012. An eponymous film adaptation of Kyle’s book, directed by Clint Eastwood, was released two years later. Kyle was arguably one of the U.S. deadliest snipers in Iraq with a large number of confirmed and unconfirmed kills. The Pentagon has officially confirmed more than 150 kills, but it has declined to verify the total number for Kyle’s book. In his autobiography, Kyle wrote: The Navy credits me with more kills as a sniper than any other American service member, past or present. I guess that’s true. They may even get the truth, even if it’s somewhere in between this number and the number you want, then it’s higher, if you want it to be higher than it’s been in the past. Kyle became known as \”The Legend\” among the general infantry, including Marines whom he had the task of protecting. The nickname originated among Kyle’s fellow SEALs following his taking of a sabbatical to train other snipers in Fallujah, and he was sometimes called \”The Myth\”.

Kyle and his brother grew up raising up to 150 head of cattle at a time. Kyle attended high school in Midlothian, Texas, and after graduating in 1992, became a professional bronco rodeo rider and ranch hand, but his professional rodeo career ended abruptly when he severely injured his arm. Kyle went to a military recruiting office, as he was interested in joining the Marine Corps special operations. A U. S. Navy recruiter convinced him to try instead for the SEALs. Kyle graduated with Class 233 in March 2001. Assigned to SEAL Team-3, sniper element, Platoon \”Charlie\”, within the Naval Special Warfare Command, and with four tours of duty, Kyle served in many major battles of the Iraq war. In 2008, outside Sadr City, he killed an insurgent sniper aiming at other members of the military with a straight-up luck shot from about 2,100 yards away. Kyle shot a woman carrying a hand grenade approaching a group of Marines. As ordered, Kyle opened fire, killing the woman before she could attack. Because of his track record as a marksman, the insurgents named Kyle Shaitan Ar-Ramadi, and put a USD 20,000 bounty on his head that was later increased to USD 80,000. They posted signs highlighting the cross on his arm as a means of identifying him. Kyle later stated, “I was just making sure she didn’t take any Marines with her.’’ Kyle was shot twice and survived six separate IED detonations.

You want to know more about Chris Kyle?

This page is based on the article Chris Kyle published in Wikipedia (as of Jan. 04, 2021) and was automatically summarized using artificial intelligence.