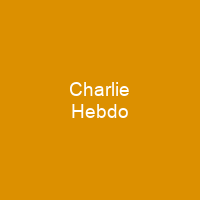 Charlie Hebdo is a French satirical weekly magazine. It first appeared in 1970 as a companion to the monthly Hara-Kiri magazine. In 1981, publication ceased, but the magazine was resurrected in 1992. It has been the target of three terrorist attacks: in 2011, 2015, and 2020.

About Charlie Hebdo in brief

Charlie Hebdo is a French satirical weekly magazine. It first appeared in 1970 as a companion to the monthly Hara-Kiri magazine. In 1981, publication ceased, but the magazine was resurrected in 1992. It has been the target of three terrorist attacks: in 2011, 2015, and 2020. All of them were presumed to be in response to a number of cartoons that it published controversially depicting Muhammad. In the second of these attacks, 12 people were killed, including publishing director Charb and several other prominent cartoonists. The magazine is published every Wednesday, with special editions issued on an unscheduled basis. Gérard Biard is the current editor-in-chief of Charlie Hebdo. The previous editors were François Cavanna and Philippe Val. The new name was derived from a monthly comics magazine called Charlie, which had been started by Bernier and Delfeil deTon in 1969. The monthly Charlie took its name from the lead character of one of the comics it originally published, Peanuts’s Charlie Brown. Using that title for the new weekly magazine was also an inside joke about Charles de Gaulle. In November 1970, the former French president Charles de Gaulle died in his home village of Colombey-les-Deux-Églises, eight days after a disaster in a nightclub, the Club Cinq-Sept fire, which caused the death of 146 people. As a result, the weekly was banned. In order to sidestep the ban, the editorial team decided to change its title, and used Charlie Hebdo, which became an official slogan for the magazine and made it into everyday language in France.

The first issue did feature a Peanuts strip, as the editors were fans of the series. In 1991, Gébé, Cabu, and others were reunited to work for La Grosse Bertha, a new magazine created in reaction to the First Gulf War and edited by singer and comedian Philippe Val. However, the following year, Val clashed with the publisher, who wanted apolitical humour, and decided to launch their own paper again. After much publicity, the new magazine was launched in July 1992 amidst much publicity. The new editor was Philippe Val, and the new publication was owned by Gé bé and Renaud Cabu. On April 26, 1996, François Choron, Charb, and PhilippeVal filed 173,704 signatures, with the aim of banning the political party National Front, since it would have sold 100,000 copies of the magazine. On January 26, 1997, the first issue was sold, with 173,000copies of the publication sold in eight months. The second issue was released on July 25, 1998, and it was the first time the magazine had been published in English. The third issue was published on July 27, 1998. It was the last issue to be published before the publication of the second issue of the third issue, on July 28, 1999.

You want to know more about Charlie Hebdo?

This page is based on the article Charlie Hebdo published in Wikipedia (as of Nov. 12, 2020) and was automatically summarized using artificial intelligence.