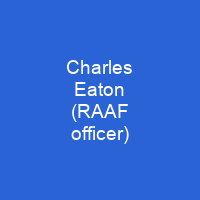 Charles Eaton, OBE, AFC was a senior officer and aviator in the Royal Australian Air Force. Born in London, he saw action on the Western Front before transferring to the Royal Flying Corps in 1917. Popularly known as ‘Moth’, he is buried at St Paul’s Anglican Church in Sydney.

Charles Eaton, OBE, AFC was a senior officer and aviator in the Royal Australian Air Force. Born in London, he saw action on the Western Front before transferring to the Royal Flying Corps in 1917. Posted as a bomber pilot to No.206 Squadron, he was twice captured by German forces, and twice escaped. Eaton left the military in 1920 and worked in India until moving to Australia in 1923. Two years later he joined the RAAF, serving initially as an instructor at No.1 Flying Training School. In 1939, on the eve of World War II, Eaton became the inaugural commanding officer of No.12 Squadron at the newly established RAAF Station Darwin in Northern Australia. He was promoted group captain in 1940, and appointed an Officer of the Order of the British Empire the following year. In 1945, Eaton took up diplomatic posts in the Dutch East Indies, heading a United Nations commission as Consul-General during the Indonesian National Revolution. In 1950, he returned to Australia, and served in Canberra for a further two years. He died in 1979 aged 83, and was a farmer in later life, and is commemorated by several memorials in the Northern Territory. Popularly known as ‘Moth’, he is buried at St Paul’s Anglican Church in Sydney. He is survived by his wife Beatrice Godfrey, who he married in January 1919, and their three children.

The couple had a son and a daughter, both of whom died in childhood. For more information on Charles Eaton and his family, visit: http://www.justgiving.com/Charles-Eaton-and-the-children-of-Beatrice-Godfrey-“Moth-” and “The Moth-Family” ”Moth.”. For information on the Moth Family, visit www.moth-family.org.uk. For further information on how to donate to the Moths Foundation, please visit: www.themothfoundation.org/moth.uk/. For more on the Air Force Cross, visit http:// www.airforcecross.org/. For information about the Royal Air Force, visit the Royal Australia Air Force website: http:www.raf.gov.au/airforce/cross/index.html. For confidential support call the Samaritans in the UK on 08457 90 90 90 or visit a local Samaritans branch or click here. For support in the U.S. call the National Suicide Prevention Lifeline at 1-800-273-8255. For help in the Middle East, call the American Samaritans on 1-8457-9255 or visit http: www.samaritans.org or the UK Samaritans on their page on the British Samaritans. For details on the European Volunteer Service, call the Samaritans on the UK Samaritans, visit the British Samaritans or the European Voluntary Service on their page.

You want to know more about Charles Eaton (RAAF officer)?

This page is based on the article Charles Eaton (RAAF officer) published in Wikipedia (as of Dec. 08, 2020) and was automatically summarized using artificial intelligence.