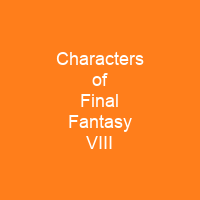 Final Fantasy VIII is a 1999 best-selling role-playing video game by Squaresoft. The game’s characters were created by Tetsuya Nomura, and are the first in the series to be realistically proportioned in all aspects of the game. The six main playable characters are Squall Leonhart, Rinoa Heartilly, Quistis Trepe, Zell Dincht, Selphie Tilmitt and Laguna Loire.

About Characters of Final Fantasy VIII in brief

Final Fantasy VIII, a 1999 best-selling role-playing video game by Squaresoft, features an elite group of mercenaries called “SeeD”, as well as soldiers, rebels, and political leaders of various nations and cities. The game’s characters were created by Tetsuya Nomura, and are the first in the series to be realistically proportioned in all aspects of the game. The six main playable characters are Squall Leonhart, a loner who avoids vulnerability by focusing on his duty; Rinoa Heartilly, an outspoken and passionate young woman who follows her heart; Quistis Trepe, an instructor with a serious yet patient attitude; Zell Dincht, an energetic martial artist with a fondness for hot dogs; Selphie Tilmitt, a cheerful girl who loves trains and flies the airship Ragnarok. Temporarily playable characters include Laguna Loire, Kiros Seagill, and Ward Zabac. The main antagonist is Ultimecia, a sorceress from the future who wishes to compress time. Thirteen weeks after its release, Final Fantasy VIII had earned more than US$50 million in sales, making it the fastest selling Final Fantasy title at the time. The game has shipped 8. 15 million units worldwide as of March 2003. It was voted the 22nd-best game of all time by readers of the Japanese magazine Famitsu in 2006. It has received generally positive reviews from gaming magazines and websites. It is one of the most popular games in the Final Fantasy series, with more than 10 million copies sold worldwide since its release in 1999.

In Final Fantasy VII, protagonist Cloud Strife’s reserved nature led Nojima to include scenarios in which the player can select Cloud’s responses to certain situations and dialogue. With Finalantasy VIII, which also features a reserved lead protagonist in Squall, Nojimas wanted to give players actual insight into what the protagonist is thinking, even while other characters remain uninformed. This led to the inner dialogues Squall has throughout the game, and to the two playable parties featured in the game—Squall’s present day group and Laguna loire’s group from twenty years in the past—to highly contrast with. Laguna’s group consists of a close-knit group of battle-hardened friends in their late twenties. On the other hand, Squall’s party is young and inexperienced, and Squall himself does not initially understand the value of friendship. The first character Nomura designed specifically for Final Fantasy 8 was Squall. Nomura wanted to try a unique angle to establish his role, giving him the characteristic gunblade scar across the bridge of his nose. A complete history was not yet conceived, so Nomura left the explanation for Squall’s scar along with a fur lining along the collar of his jacket, which was included for the game’s full motion designers, who were also developing the CGI film The Spirits Within. This is an example of the demands of the programmers of the series.

You want to know more about Characters of Final Fantasy VIII?

This page is based on the article Characters of Final Fantasy VIII published in Wikipedia (as of Nov. 03, 2020) and was automatically summarized using artificial intelligence.