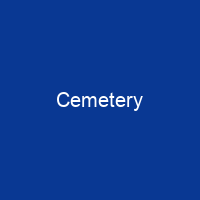 In Western cultures, funeral ceremonies are often observed in cemeteries. The intact or cremated remains of people may be interred in a grave, or in a tomb, an above-ground grave, a mausoleum, columbarium, niche, or other edifice. Taforalt cave in Morocco is the oldest known cemetery in the world.

About Cemetery in brief

A cemetery, burial ground or graveyard is a place where the remains of dead people are buried or otherwise interred. In Western cultures, funeral ceremonies are often observed in cemeteries. The intact or cremated remains of people may be interred in a grave, or in a tomb, an above-ground grave, a mausoleum, columbarium, niche, or other edifice. Taforalt cave in Morocco is the oldest known cemetery in the world. It was the resting place of at least 34 Iberomaurusian individuals, the bulk of which have been dated to 15,100 to 14,000 years ago. In Europe, in the 7th century a burial was under the control of the Church and could only take place on consecrated church ground. Starting in the early 19th century, the burial of the dead in graveyards began to be discontinued, due to rapid population growth and outbreaks of infectious disease. Instead, completely new places of burial were established away from heavily populated areas and outside of old towns and city centers. In some cases, skeletons were exhumed from graveyard and moved into ossuaries or catacombs. An example of a landscape is Père Lachaise in Paris. This embodied the idea of state-controlled burial, rather than church-controlled state burial. This could include the opening of private or joint stock companies or non-denominational cemetersies. In Britain the Rosary Cemetery in Norwich was opened in 1819 as a private burial ground for all religious backgrounds. In many European states, burial was eventually outlawed altogether through legislation.

In most cultures those who were vastly rich, had important professions, were part of the nobility or were of any other high social status were usually buried in individual crypts inside or beneath the relevant place of worship with an indication of their name, date of death and other biographical data. Usually the more writing and symbols carved on the headstone, the more expensive it was. Those who could not pay for a headstone at all usually had some religious symbol made from wood on the place of burial such as a Christian cross. Some families hired a blacksmith and had large crosses made from various metals put on the places of death. The bones of an estimated 6 million people are to be found there. The Rosary cemetery in Norwich is one of the chief sources of information on ancient and prehistoric cultures, and numerous archaeological cultures are defined by their burial customs, such as theUrnfield culture of the European Bronze Age. In the UK, private non-ominational burial grounds were established near industrial towns near the city of Norwich in the 1880s and 1990s. The move to non-enormous burial grounds was driven by public health and public health concerns and was usually accompanied by the establishing of landscaped burial grounds outside the city. In the U.S. and Canada, the term cemetery implies that the land is specifically designated as a burial ground and originally applied to the Roman catacomb.

You want to know more about Cemetery?

This page is based on the article Cemetery published in Wikipedia (as of Jan. 30, 2021) and was automatically summarized using artificial intelligence.

Tomb of the Unknown Soldier (Arlington)

Tomb of the Unknown Soldier (Arlington)