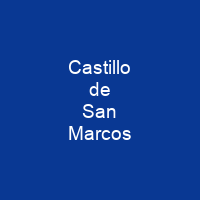 The Castillo de San Marcos is the oldest masonry fort in the continental United States. Construction began in 1672, 107 years after the city’s founding by Spanish Admiral and conquistador Pedro Menéndez de Avilés. The need for fortifications was recognized after it was attacked by Sir Francis Drake and his fleet of 22 ships in 1586.

The Castillo de San Marcos is the oldest masonry fort in the continental United States. Construction began in 1672, 107 years after the city’s founding by Spanish Admiral and conquistador Pedro Menéndez de Avilés. The fort’s construction was ordered by Governor Francisco de la Guerra y de la Vega after a raid by the English privateer Robert Searles in 1668. The Castillo is a masonry star fort made of a stone called coquina, which consists of ancient shells that have bonded together to form a sedimentary rock similar to limestone. Under United States control the fort was used as a military prison to incarcerate members of Native American tribes starting with the Seminole. The Native American art form known as Ledger Art had its origins at the fort during the imprisonment of members of the Plains tribes such as Howling Wolf of the southern Cheyenne. It was declared a National Monument in 1924, and after 251 years of continuous military possession, was deactivated in 1933. Ownership of the Castillo was transferred to the National Park Service in 1933, and it has been a popular tourist destination since then. The 20.48-acre site was subsequently turned over to the United States National Park service. In 1942 the original name, Castillo of San Marcos, was restored by an Act of Congress. It is located on the western shore of Matanzas Bay in the city of St. Augustine, Florida. It has four bastions named Pedro, San Agustín, San Carlos and San Pablo with a ravelin protecting the sally port on the two large landward sides which would force attackers to advance upward toward the fort’s cannon and allow the cannon shot to proceed downslope.

The Fort has been attacked several times and twice besieged: first by English colonial forces led by Carolina Colony Governor James Moore in 1702, and then by English Georgia colonial Governor James Oglethorpe in 1740, but was never taken by force. However, possession of the fort has changed six times, all peaceful, among four different governments: Spain, 1695–1763 and 1783–1821, Kingdom of Great Britain, 1763–1783, and the U.S. of America, 1821–date. In 1819, Spain signed the Adams–Onís Treaty which ceded Florida to the US and renamed the fort Fort Marion, in honor of American Revolutionary War hero Francis Marion. The fort has lasted twenty-three years, with completion in 1695, with the construction of the core of the current fortress being completed in 1696. The need for fortifications was recognized after it was attacked by Sir Francis Drake and his fleet of 22 ships in 1586, and over the next 80 years, a succession of nine wooden forts were built in various locations along the coastline. After a 1668 attack by theEnglish pirate Robert Searle during which the town of St Augustine was burned to the ground, Spanish Queen Mariana, Queen Regent of Spain, approved theConstruction of a masonic fortification to protect the city.

You want to know more about Castillo de San Marcos?

This page is based on the article Castillo de San Marcos published in Wikipedia (as of Jan. 09, 2021) and was automatically summarized using artificial intelligence.

Pedro I of Brazil

Pedro I of Brazil