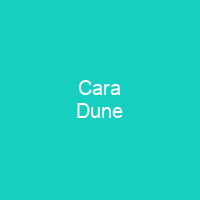 Cara Dune is a fictional character in the Star Wars franchise who appears in the Disney+ television series The Mandalorian. She is a former Rebel shock trooper turned mercenary and eventually marshal for the New Republic. Cara’s full name is revealed to be Carasynthia Dune, and her homeworld to be Alderaan. She has been described as a feminist role model.

About Cara Dune in brief

Cara Dune is a fictional character in the Star Wars franchise who appears in the Disney+ television series The Mandalorian. She is a former Rebel shock trooper turned mercenary and eventually marshal for the New Republic who becomes a supporting character on the show as an ally to the title character. Cara’s full name is revealed to be Carasynthia Dune, and her homeworld to be Alderaan, the planet destroyed by the Death Star in the first Star Wars film. She has been described as a feminist role model, with some reviewers calling her unique even among the StarWars franchise’s female characters due to her physicality and combat skills. Carano described the character as a loner who is having trouble readjusting to society following her career as a soldier. The Mandalorians creator and showrunner Jon Favreau created Cara Dune with Carano specifically in mind and did not audition any other actresses for the part. Favreau sought to create a strong and independent character, but one different from Princess Leia or other powerful Star Wars female characters. In the first-season finale, Cara reveals that most of her past work as a Rebel soldier involved eliminating Imperial warlords and other remnants of the Empire following the Battle of Endor, the decisive Rebel victory depicted in Return of the Jedi. Her role as a shock trooper was to be dropped behind enemy lines with no support, and cause as much damage as possible. The dialogue also establishes that she left the Alliance after her role shifted to a more political \”peacekeeping\” role, such as protecting delegates and suppressing riots, which Cara said was “not what I signed up for” Cara made her first appearance in \”Chapter 4: Sanctuary\”, the fourth episode of The Mandalian.

She meets the show’s title character, a bounty hunter known simply as the Mandalorian, and each wrongly believes the one was attempting to collect a bounty on each other. They reconcile and ultimately join forces to defend a village against a ravaging band of raiders of the Klatooinian species. When the AT-ST fails to advance far enough to fall into the pond traps, Car a successfully lures it forward by leaping into a pond herself and attacking it at close range. When he first finds her, he recruits her for a mission to eliminate an Imperial presence on the planet Nevarro. After the battle, she saves the life of Grogu, a young alien creature under the Mandalorians’ protection, when she finds him just before he is about to be executed. As a result, she agrees to come along with him on the mission, but she is initially reluctant to leave Sorgan. She reappears in the episode The Reckoning, when he explains that the Imperials are not Imperials, but that they are Imperials. She eventually agrees to participate in participating in fights with challengers for money. When she first finds an Imperial Presence on Nevarro, she is first participating in a fight with challenger challengers for Money.

You want to know more about Cara Dune?

This page is based on the article Cara Dune published in Wikipedia (as of Dec. 06, 2020) and was automatically summarized using artificial intelligence.