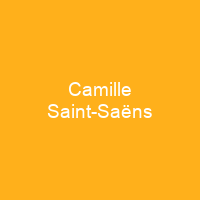 Charles-Camille Saint-Saëns (9 October 1835 – 16 December 1921) was a French composer, organist, conductor and pianist. His best-known works include Introduction and Rondo Capriccioso, the Second Piano Concerto, Danse macabre, Samson and Delilah and The Carnival of the Animals. He was a musical prodigy; he made his concert debut at the age of ten.

About Camille Saint-Saëns in brief

Charles-Camille Saint-Saëns (9 October 1835 – 16 December 1921) was a French composer, organist, conductor and pianist of the Romantic era. His best-known works include Introduction and Rondo Capriccioso, the Second Piano Concerto, Danse macabre, Samson and Delilah and The Carnival of the Animals. He was a musical prodigy; he made his concert debut at the age of ten. As a young man he was enthusiastic for the most modern music of the day, particularly that of Schumann, Liszt and Wagner, although his own compositions were generally within a conventional classical tradition. His students included Gabriel Fauré, among whose own later pupils was Maurice Ravel, whom they revered as a genius. In his later years he was in conflict with composers of the impressionist and dodecaphonic schools of music; although there were neoclassical elements in his music, foreshadowing works by Stravinsky and Les Six, he was often regarded as a reactionary in the decades around the time of his death. The music critic Harold C. Schonberg wrote of Saint- Saëns in 1969, “It is not generally realized that he was the most remarkable child prodigy in history, and that includes Mozart” He was the only child of an official in the French Ministry of the Interior, and Françoise-Clémence, née Collin.

He always considered himself a true Parisian, and was baptised in the Rue du Jardinet in the 6th arrondissement of Paris, and baptised at the nearby church ofSaint-Sulpice. His father Victor died of consumption on the first anniversary of his marriage, and the young Camille was taken to the country for the sake of his health, and for two years lived with a nurse at Corbeil, 29 kilometres to the south of Paris. When he was brought back to Paris he lived with his mother and her widowed aunt, Charlotte Masson. His great-aunt taught him the basics of pianism, and when he was seven he became a pupil of Camille-Marie Stamaty, a former pupil of Friedrich Kalkbrenner. In 1848 he acquired a love of the music of Bach, which was then little known in France. In addition to his musical prowess, he distinguished himself in the study of French literature, Latin and Greek, divinity, archaeology and astronomy, particularly in the last years of his life, which he remained a talented amateur. He died in Paris in 1921, aged 67, and is buried in the Père-Lachaise Cemetery in Paris, next to his mother. He is survived by his wife, his three children, and his two step-daughters, and a son and a daughter-in-law. He also leaves behind a daughter and a step-son, Marie-Louise.

You want to know more about Camille Saint-Saëns?

This page is based on the article Camille Saint-Saëns published in Wikipedia (as of Nov. 22, 2020) and was automatically summarized using artificial intelligence.