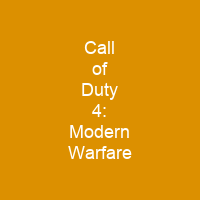 The game is the fourth main installment in the Call of Duty series. It was the top-selling game worldwide for 2007. It has been followed by two sequels that continue the storyline. A reboot of the Modern Warfare games, call of Duty: Modern Warfare, was released in October 2019.

About Call of Duty 4: Modern Warfare in brief

Call of Duty 4: Modern Warfare is a 2007 first-person shooter developed by Infinity Ward and published by Activision. It is the fourth main installment in the Call of Duty series. The game breaks away from the World War II setting of previous entries and is instead set in modern times. The multiplayer portion of the game features various game modes and contains a leveling system that allows the player to unlock additional weapons, weapon attachments, and camouflage schemes as they advance. It was the top-selling game worldwide for 2007, selling around seven million copies by January 2008 and almost sixteen million by November 2013. A reboot of the Modern Warfare games, call of Duty: Modern Warfare, was released in October 2019. A remastered version of thegame was released as part of special edition bundles of Call of duty: Infinite Warfare in November 2016, and as a standalone game in June 2017. It has been followed by two sequels that continue the storyline: Call of Warfare 2 and Call ofduty: Modern Warfare 3. The player takes on the role of various characters during a single-player campaign. The characters’ involvement in the plot occurs simultaneously and overlaps the events in the game. The main campaign features 30 collectible pieces of intel that award the player with game cheats and visual filters such as infinite ammunition, cluster grenades, and increased contrast. Each mission features a series of objectives; the player is led to each objective with the heads up display, which marks its direction and distance. Some objectives require that the player arrives at a checkpoint, while other objectives require the player.

to eliminate enemies in a specified location, stand their ground to defend an objective, or plant explosive charges on an enemy installation. After completing the campaign, a special epilogue mission is unlocked for play. The mission itself has no bearing on the campaign plot, and focuses on an SAS squad fighting terrorists that have hijacked an airplane and taken a VIP hostage. Each objective has an objective that requires unique strategies to complete. Players can call in UAV reconnaissance scans, when they achieve three-, five, and seven-kill streaks respectively. A team or player has reached a predefined number of points, or the number of time allotted in which the next team to win is tracked with the player’s performance in the multiplayer mode. If there is no re-spawning, Sudden Death mode is activated in which there are no players left standing and the team who has the last man standing is the winner. If the player in the next match is the first to achieve the first objective, the next player to win the next game is rewarded with the victory experience with the game’s Overtime match. When the edges of the screen glow red and the character’s heartbeat increases, a marker indicates the direction of a live grenade, helping the players to either flee or toss it back to the enemy. As opposed to earlier games, the game has no armor or health power-ups. As such, the player can be positioned in one of three stances: standing, crouching, or prone, each affecting thecharacter’s movement, accuracy, and stealth.

You want to know more about Call of Duty 4: Modern Warfare?

This page is based on the article Call of Duty 4: Modern Warfare published in Wikipedia (as of Dec. 07, 2020) and was automatically summarized using artificial intelligence.