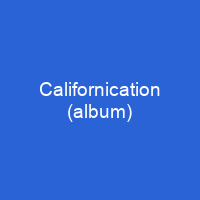 Californication is the seventh studio album by American rock band Red Hot Chili Peppers. It was released on June 8, 1999, on Warner Bros. Records and was produced by Rick Rubin. The album peaked at number three on the US Billboard 200. It is the Chili Pepper’s most commercially successful studio release internationally, with over 15 million copies sold worldwide, and more than 7 million in the United States alone.

About Californication (album) in brief

Californication is the seventh studio album by American rock band Red Hot Chili Peppers. It was released on June 8, 1999, on Warner Bros. Records and was produced by Rick Rubin. Californication marked the return of John Frusciante, who had previously appeared on Mother’s Milk and Blood Sugar Sex Magik, to replace Dave Navarro as the band’s guitarist. The album’s subject material incorporated various sexual innuendos commonly associated with the band, but also contained more varied themes than previous outings, including death, contemplations of suicide, California, drugs, globalization, and travel. It is the Chili Pepper’s most commercially successful studio release internationally, with over 15 million copies sold worldwide, and more than 7 million in the United States alone. As of 2002, the album had sold over 4 million copies in Europe. The record produced several hits, including \”Otherside\” and the Grammy Award-winning \”Scar Tissue” The album peaked at number three on the US Billboard 200. It has been described as “the most successful studio album of all time” by Rolling Stone’s Greg Tate, who said it “dares to be spiritual and epiphanic” The band’s main point behind this album was to \”tell tales of wandering souls who’ve lost their way searching for the American dream in California\”. Californication’s lyrics were derived from Anthony Kiedis’ ideas, outlooks, and perceptions of life and its meaning. Most of the material and lyrics throughout the songs in the album came from the \”personal and professional turmoil\” that different members of the band went throughwere currently going through at the time.

This resulted in the \”sensitive approach that one might not expect from a band whose followers are skate-punks and fraternity boys\”. The album was written in the summer of 1998, and was recorded in the band members’ homes in the Los Angeles area. The band reunited for the first time in six years in April 1999, and the band gathered to play and jump-started the newly reunited Red Hot Chilli Peppers again. The song “Porcelain” was inspired by a meeting with a young single mother at the YMCA, who was attempting to battle her heroin addiction while living with her infant daughter in Los Angeles. The group had a love interest in Yohanna Logan, a fashion designer whom they met while she was working in New York City. The guitarist who played the guitar in “This Velvet Glove” had an attempt to use two notes that are played far apart, but he ultimately crafted a song around a rhythm that he considered to be the “King of Sarcasm” He was inspired to do this by former bandmate Dave Navaro, whom he considered the “cool” guitarist. FrusCIante pushed for the group to change their sound and become more of a \”mellow-progressive rock act\” for Californication. The guitarists spent days together discussing song creation, guitar riffs and lyricals, and bass and percussion were constructed through jam sessions and the work of Flea and drummer Chad Smith.

You want to know more about Californication (album)?

This page is based on the article Californication (album) published in Wikipedia (as of Dec. 05, 2020) and was automatically summarized using artificial intelligence.