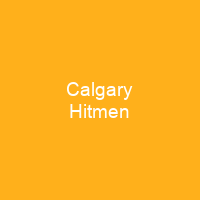 The Calgary Hitmen are a major junior ice hockey team based in Calgary, Alberta, Canada. Established in 1994, the team has been owned by the Calgary Flames hockey club since 1997. Bret Hart, a local-born professional wrestler, was a founding owner as well as the inspiration for the team’s name. The club’s distinctive pink, grey and black jerseys were also modelled after Hart’s ring attire.

About Calgary Hitmen in brief

The Calgary Hitmen are a major junior ice hockey team based in Calgary, Alberta, Canada. Established in 1994, the team has been owned by the Calgary Flames hockey club since 1997. Bret \”The Hitman\” Hart, a local-born professional wrestler, was a founding owner as well as the inspiration for the team’s name. The Hitmen have finished with the best record in the WHL four times, and qualified for the playoffs for thirteen consecutive seasons between 1998 and 2010. In 1999, they became the first Calgary team to win the President’s Cup as league champions, and the first to represent the city in the Memorial Cup since the Calgary Canadians won the national junior title in 1926. Thirty-nine former Hitmen players have gone on to play in the National Hockey League. The club’s distinctive pink, grey and black jerseys were also modelled after Hart’s ring attire. They are the third WHL team to represent Calgary, preceded by the Centennials and Wranglers. They play their home games at the Scotiabank Saddledome. The original investors were many of whom played for or were otherwise associated with the Flames. Graham James left his position as coach and general manager of the Swift Current Broncos to found the Hitmen in 1994. He organized a group of eighteen investors in the club, including star NHL players Theoren Fleury and Joe Sakic, along with Bret Hart, famous for his exploits in the World Wrestling Federation. James was charged, and in January 1997 pleaded guilty to two counts of sexual assault. Dean Clark took over as head coach shortly after James’ resignation, and led the team to a remarkable turnaround to a 40–28–4 record and first-place finish in the Central Division in 1997–98.

In 2004–05, they were the first team in Canadian Hockey League history to average 10,000 fans per game. The team’s logo was also subject to heavy criticism from segments of the public and the business community, who panned both as negative stereotypes of violence within the sport. It was widely speculated that the new owners would change the team name possibly to the Junior Flames, however they chose to retain the name although they adopted a new colour scheme and updated the logo. The franchise was sold to the Flames for approximately USD 1.5 million in June 1997. The Calgary Flames had been without a WHLteam since the Wrangler moved south to become the Lethbridge Hurricanes in 1987. They used the Stampede Corral for regular season home games in 1995–1996 and playoff games in 1998 and 2016. The hitmen lost CAD$250,000 in their first season playing in the newly formed Central Division, and were predicted to finish as high as third in the five-team division. In 1996, they finished as the second-worst regular season team in the league, posting an 18–51–3 record. The losses led to questions about the viability of the club. Citing personal reasons, James stunned the organization when he resigned as coach on September 5, 1996. Two days later, the Calgary Police Service revealed that James was being investigated on allegations he sexually abused two former players.

You want to know more about Calgary Hitmen?

This page is based on the article Calgary Hitmen published in Wikipedia (as of Dec. 06, 2020) and was automatically summarized using artificial intelligence.