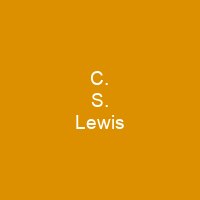 Clive Staples Lewis was a British writer and lay theologian. He is best known for his works of fiction, especially The Screwtape Letters, The Chronicles of Narnia, and The Space Trilogy. He also wrote non-fiction Christian apologetics, such as Mere Christianity and Miracles. Lewis died on 22 November 1963 from kidney failure, one week before his 65th birthday.

About C. S. Lewis in brief

Clive Staples Lewis was a British writer and lay theologian. He is best known for his works of fiction, especially The Screwtape Letters, The Chronicles of Narnia, and The Space Trilogy. He also wrote non-fiction Christian apologetics, such as Mere Christianity and Miracles. Lewis died on 22 November 1963 from kidney failure, one week before his 65th birthday. In 2013, on the 50th anniversary of his death, Lewis was honoured with a memorial in Poets’ Corner in Westminster Abbey. Lewis was born in Belfast, Ireland, on 29 November 1898. His father was Albert James Lewis, a solicitor whose father Richard had come to Ireland from Wales during the mid-19th century. His mother was Florence Augusta Lewis, née Hamilton, known as Flora, the daughter of Thomas Hamilton, a Church of Ireland priest. He was baptised on 29 January 1899 by his maternal grandfather in St Mark’s Church, Dundela. When his dog Jacksie was killed by a car, the four-year old Lewis adopted the name Jacksie. At first, he would answer to no other name, but later accepted Jack, the name by which he was known to friends and family for the rest of his life. As a boy, Lewis fell in love with Beatrix Potter’s stories and often wrote and illustrated his own animal stories. He and his brother Warnie created the world of Boxen, inhabited and run by animals. Lewis loved to read; his father’s house was filled with books, and he felt that finding a book to read was as easy as walking into a field and \”finding a new blade of grass\”.

The New House is almost a major character in my story. I am the product of long corridors, empty sunlit rooms,upstair indoor silences, attics explored in solitude,distant noises of gurgling cisterns and pipes,and the noise of wind under the tiles. Also, of endless books. —Surprised by Joy, Lewis’s 1955 memoir. In 1956, Lewis married American writer Joy Davidman; she died of cancer four years later at the age of 45. In September 1913, Lewis enrolled at Malvern College, Worcestershire, where he studied privately with William T. Kirkpatrick, his father’s old tutor and former headmaster of Lurgan College. It was during this time that Lewis became an atheist, becoming interested in mythology and the occult. He remained until the following June 1913, when he attended Cherbourg House, a preparatory school where he was sent to the health-resort town of Cherbourg. He then attended Campbell College in the east of Belfast about a mile from his home, but left after a few months due to respiratory problems. Lewis then went on to study at Oxford University and Cambridge University. He wrote more than 30 books which have been translated into more than30 languages and have sold millions of copies. His philosophical writings are widely cited by Christian apologists from many denominations.

You want to know more about C. S. Lewis?

This page is based on the article C. S. Lewis published in Wikipedia (as of Dec. 14, 2020) and was automatically summarized using artificial intelligence.