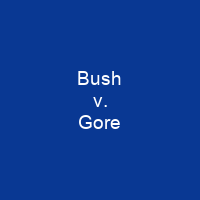 Bush v. Gore, 531 U.S. 98, was a decision of the United States Supreme Court on December 12, 2000, that settled a recount dispute in Florida’s 2000 presidential election between George W. Bush and Al Gore. Florida’s votes gave Bush, the Republican candidate, 271 electoral votes, one more than the 270 required to win the Electoral College. This meant the defeat of Democratic candidate Al Gore, who won 267 electoral votes.

About Bush v. Gore in brief

Bush v. Gore, 531 U.S. 98, was a decision of the United States Supreme Court on December 12, 2000, that settled a recount dispute in Florida’s 2000 presidential election between George W. Bush and Al Gore. On December 8, the Florida Supreme Court had ordered a statewide recount of all undervotes, over 61,000 ballots that the vote tabulation machines had missed. The Bush campaign immediately asked the U. S. Supreme Court to stay the decision and halt the recount. Justice Antonin Scalia, convinced that all the manual recounts were illegitimate, urged his colleagues to grant the stay immediately. The Supreme Court decision allowed the previous vote certification made by Florida Secretary of State Katherine Harris to stand for Bush. Florida’s votes gave Bush, the Republican candidate, 271 electoral votes, one more than the 270 required to win the Electoral College. This meant the defeat of Democratic candidate Al Gore, who won 267 electoral votes. Media organizations later analyzed the ballots and found that, under any considered criteria, the originally pursued, limited county-based recounts would have confirmed a Bush victory, whereas a state-wide recount would have revealed a Gore victory. The majority held that no alternative method could be established within the discretionary December 12 “safe harbor” deadline set by Title 3 of the Florida Election Code, which the Florida Legislature intended to meet. The court rejected an extension of the deadline, saying that not meeting the deadline would therefore violate the Florida election code.

The decision allowed Bush to win Florida’s 25 electoral votes and Gore to lose. The case was decided on equal protection grounds, and the decision was appealed to the Supreme Court of United States, which ruled in favor of Bush on December 11. The ruling was appealed again on December 13. The appeal was dismissed. The state legislature decides how electors are chosen in each state. The voters are actually voting for a slate of electors, each of whom pledges to vote for a particular candidate for each office, in the Electoral Council. While these laws vary, most states, including Florida, award all electoral votes to the candidate for either office who receives a plurality of the state’s popular vote. Any candidate who receives an absolute majority of all electoral vote nationally wins the presidential or vice presidential election. Early in U. s. history, most state legislatures directly appointed the slate of elector for each of their respective states. Today, state legislatures have enacted laws to provide for the selection of electors by popular vote within each state, such as Florida, for the presidency and vice president. The case is still pending in the federal appeals court in Washington, D.C., where a decision is expected to be made in the next few weeks on whether or not to overturn the decision to stay Bush’s victory in the 2000 presidential elections. In the case of the 2004 presidential election, the case was heard before the Supreme court in New York. The vote was decided in a unanimous decision by a vote of 7–2.

You want to know more about Bush v. Gore?

This page is based on the article Bush v. Gore published in Wikipedia (as of Dec. 04, 2020) and was automatically summarized using artificial intelligence.