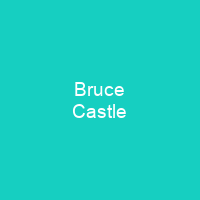 Bruce Castle is a Grade I listed 16th-century manor house in Lordship Lane, Tottenham, London. Believed to stand on the site of an earlier building, about which little is known. The house is made of red brick with ashlar quoining and the principal facade, terminated by symmetrical matching bays, has tall paned windows.

About Bruce Castle in brief

Bruce Castle is a Grade I listed 16th-century manor house in Lordship Lane, Tottenham, London. It is named after the House of Bruce who formerly owned the land on which it is built. Believed to stand on the site of an earlier building, about which little is known, the current house is one of the oldest surviving English brick houses. The house has been home to Sir William Compton, the Barons Coleraine and Sir Rowland Hill, among others. After serving as a school during the 19th century, when a large extension was built to the west, it was converted into a museum exploring the history of the areas now constituting London Borough of Haringey. Since 1892 the grounds have been a public park, Tottenham’s oldest. The name Bruce Castle first appears to have been adopted by Henry Hare, 2nd Baron Colerain, although Daniel Lysons speculates in The Environs of London the name’s use dates to the late 13th century. A detached, cylindrical Tudor tower stands immediately to the south-west of the building; however, Lysons believes it to be a later addition. The tower is built of local red brick, and is 21 feet tall, with walls 3 feet thick. It was described in 1829 as being over a deep well, and being used as a dairy. In 2006, excavations revealed that it continues for some distance below the current ground level. The Grade I mansion’s principal facade has been substantially remodelled. The house is made of red brick with ashlar quoining and the principal facade, terminated by symmetrical matching bays, has tall paned windows.

It is among the earliest uses of brick as the principal building material for an English house. At the same time, the south front’s gabled gabled wing was demolished, leaving the house’s elevation its current appearance of the inventory of the listed house. In the early 18th century the north facade of the house was remodelled into an entrance of a typical Georgian facade, and given the appearance of a Typical Georgian house. It retains the asymmetrical appearance today, leaving it with a billiard room on the first floor, with a library and breakfast parlour on the ground floor, and a drawing room, saloon, drawing room and dining room, drawing and breakfast room, on the second floor. The three parts of the manor of Tottenham were united in the early 15th century under the Gedeney family and have remained united since. In all early records, the building is referred to as the Lordship House. In the late 20th century it was added under the ownership of James Townsend, the owner of the Royal Mail. The building also houses the archives of the London Borough and the Royal Postal Service. It has been listed as a listed building since 1789. The Royal Commission on Historic Monuments attributes the house to the mid-16th century and the Grade I listing to the 17th Century.

You want to know more about Bruce Castle?

This page is based on the article Bruce Castle published in Wikipedia (as of Oct. 31, 2020) and was automatically summarized using artificial intelligence.