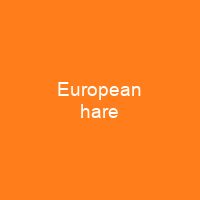 The European hare was first described in 1778 by German zoologist Peter Simon Pallas. It shares the genus Lepus with 31 other hare and jackrabbit species. It is listed as being of least concern by the International Union for Conservation of Nature because it has a wide range and is moderately abundant.

About European hare in brief

The European hare was first described in 1778 by German zoologist Peter Simon Pallas. It shares the genus Lepus with 31 other hare and jackrabbit species, jackrabbits being the name given to some species of hare native to North America. The hare has been a traditional symbol of fertility and reproduction in some cultures and its courtship behaviour in the spring inspired the English idiom mad as a March hare. It is listed as being of least concern by the International Union for Conservation of Nature because it has a wide range and is moderately abundant. However, populations have been declining in mainland Europe since the 1960s, at least partly due to changes in farming practices. There appears to be a particularly large degree of genetic diversity in hares in the North Rhine-Westphalia region of Germany. It has been speculated that in the Near East, hare populations are intergrading and experiencing gene flow. There is some debate as to whether the European hares and the Cape hare are the same species, but a 2006 study of the mitochondrial DNA of these same animals concluded that they had diverged sufficiently widely to be considered separate species. Cladogenetic analysis suggests that European. hares survived the last glacial period during the Pleistocene via refugia in southern Europe and Asia Minor. Subsequent colonisations of Central Europe appear to have been initiated by human-caused environmental changes.

It is possible that restricted gene flow could reduce diversity within populations that become isolated. Historically, up to 30 subspecies have been described, although their status has been disputed. Sixteen subspecies are listed in the IUCN book red, following Hoffmann and Smith. Twenty-nine subspecies, including the Corsican hare, broom hare and Granada hare were at one time considered to be subspecies of the EuropeanHare, but DNA sequencing and morphological analysis support their status as separate. These subspecies have been distinguished by pelage colouration, body size, skull morphology, skull shape and tooth shape. Its teeth grow continuously, being the first incisors being modified for being gnawing. Its eyes set high on the sides of its head, with a flexible neck and a long ears set on the side of its neck. It can live for up to twelve years. Litters may consist of three or four young and a female can bear three litters a year, with hares living for up-to-12 years. The female nests in a depression on the surface of the ground rather than in a burrow and the young are active as soon as they are born. A hare can be seen in broad daylight chasing one another around in fields in January to August. The species is among the largest hare species and is adapted to temperate, open country. Hares are herbivorous and feed mainly on grasses and herbs, supplementing these with twigs, buds, bark and field crops.

You want to know more about European hare?

This page is based on the article European hare published in Wikipedia (as of Nov. 14, 2020) and was automatically summarized using artificial intelligence.