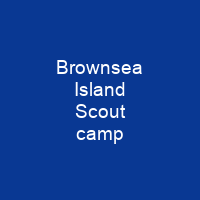 The Brownsea Island Scout camp was the site of a boys’ camping event. It was organised by Lieutenant-General Baden-Powell to test his ideas for the book Scouting for Boys. Boys from different social backgrounds participated in activities around camping, observation, woodcraft, chivalry, lifesaving and patriotism.

The Brownsea Island Scout camp was the site of a boys’ camping event. It was organised by Lieutenant-General Baden-Powell to test his ideas for the book Scouting for Boys. Boys from different social backgrounds participated in activities around camping, observation, woodcraft, chivalry, lifesaving and patriotism. The event is regarded as the origin of the worldwide Scout movement. In 1973, a Scout Jamboree with six hundred Scouts was held on the island. In 1963, a formal 50-acre Scout campsite was opened by OlavebadenPowell when the island became a nature conservation area owned by the National Trust. The worldwide centenary of Scouting took place on 1 August 2007, the 100th anniversary of the start of the first encampment. Activities by The Scout Association at the campsite included four Scout camps and a Sunrise Ceremony. The boys were arranged into four patrols, designated as the Wolves, Ravens, Bulls and Curlews. It is uncertain if 20 or 21 boys attended the camp. At least four authors list attendance at 20 boys, and that they were organized into five patrols. In 1964, William Hillcourt added the fourth Rodney brother, Simon, in Two Lives of a Hero, bringing the total to 21. The reasons why Simon Rodney was not listed by the other authors is not clear, but evidence that he was present and the 6th member of theCurlews Patrol, was recounted by Scouting historian Colin Walker.

Each patroled in each day with a bell tent from an army forest. The camp began with a blast from a kudu horn that Baden Powell had found in the Somababu forest that he had discovered in the early 1900s. The island perfectly suited his needs for the camp as it was isolated from the mainland and hence from the press, yet was only a short ferry trip from Poole, making for easy logistics. It covers 560 acres of woodland and open areas, and features two lakes. The boys did not have uniform shirts, but wore khaki scarves and fleur-de-lis badges, the first use of the Scout emblem. They also wore a knot on their shoulder indicating their patrol: blue for Wolves, yellow for Bulls, red for Ravens, and red for Curlewes, and yellow for Ravens and Curlws, and carried staff with a flag depicting the national flag. Baden had visited the island as a boy with his brothers. He was impressed by the Mafeking Cadets, made up of local boys aged 12 to 15, and had impressed him with their resourcefulness and courage.

You want to know more about Brownsea Island Scout camp?

This page is based on the article Brownsea Island Scout camp published in Wikipedia (as of Nov. 02, 2020) and was automatically summarized using artificial intelligence.