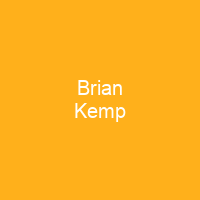 Brian Porter Kemp is an American businessman and politician serving as the 83rd governor of the U.S. state of Georgia. He previously was the 27th Secretary of State of Georgia from 2010 to 2018 and a member of the Georgia State Senate from 2003 until 2007. Kemp refused to resign as secretary of state while campaigning for governor, which stirred controversy and accusations of abuse of power.

About Brian Kemp in brief

Brian Porter Kemp is an American businessman and politician serving as the 83rd governor of the U.S. state of Georgia since January 2019. He previously was the 27th Secretary of State of Georgia from 2010 to 2018 and a member of the Georgia State Senate from 2003 until 2007. Kemp refused to resign as secretary of state while campaigning for governor, which stirred controversy and accusations of abuse of power. During the 2016 election, Kemp was the only state official to reject help from the Department of Homeland Security to guard against Russian interference. In 2020, it was revealed that the supposed cybercrime that his office had been the victim of was in fact a planned security test that Kemp’s chief information officer signed off on three months prior. Kemp rejects the conclusion by the United States Intelligence Community that Russia interfered in the 2016 elections. His eighteenth-century ancestor James Habersham successfully lobbied to institute slavery in Georgia, becoming the colony’s governor and building a fortune from the family’s slave-worked rice plantations of Silk Hope, Forest Dean, and Beverley. Kemp’s grandfather, Julian H. Cox Sr., was a member. of theGeorgia Legislature, and his father, William L. Kemp II, was a prominent family with a history of political power. Kemp was a homebuilder and developer before entering politics. In 2002, he was elected to the Georgia state Senate. In 2006, Kemp ran for Agriculture Commissioner of Georgia. He ran second in the primary, but lost a runoff to Gary Black. Kemp initially declared intent to run for State Senate District 47 when incumbent Ralph Hudgens planned to running for Congress in Georgia’s 10th congressional district.

He later changed his plans and ran for Congress instead. Kemp won the 2010 election for a full term as Georgia Secretary of state with 56.4% of the vote, to 39. 4% for his Democratic opponent, Georganna Sinkfield. Four years later, Kempwas reelected. In 2017, Kemp denounced efforts by the Obama administration to strengthen the security of election systems, including improving access to federal assistance. After narrowly winning the 2018 gubernatorial election, he resigned his office in anticipation of becoming Governor. In August 2016, Kemp said that Russian attempts to disrupt the elections was an intrusion by hackers into the voting systems by the previous administration, adding that he didn’t necessarily believe Russia had attempted to disrupt them. In 2018, Kemp held up more than 53,000 voter registration applications, with nearly 70 per cent of the voter registrations belonging to African Americans. As governor, during the COVID-19 pandemic, Kemp forbade cities and counties from implementing face mask mandates in spite of public health guidance that supported such mandates. He won the general election on November 6, 2018 with 50.2% of vote, and subsequently suspended her campaign on November 16. Kemp is a graduate of the University of Georgia, where he majored in agriculture. He also served as a Georgia State Senator from 2003 to 2007 after defeating the Democratic incumbent Doug Haines.

You want to know more about Brian Kemp?

This page is based on the article Brian Kemp published in Wikipedia (as of Jan. 07, 2021) and was automatically summarized using artificial intelligence.