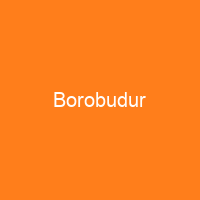 Borobudur is a 9th-century Mahayana Buddhist temple in Magelang Regency, in Central Java, Indonesia. The temple consists of nine stacked platforms, six square and three circular, topped by a central dome. It is decorated with 2,672 relief panels and 504 Buddha statues. The monument is popular for pilgrimage, with Buddhists in Indonesia celebrating Vesak Day at the monument.

About Borobudur in brief

Borobudur is a 9th-century Mahayana Buddhist temple in Magelang Regency, not far from the town of Muntilan, in Central Java, Indonesia. The temple consists of nine stacked platforms, six square and three circular, topped by a central dome. It is decorated with 2,672 relief panels and 504 Buddha statues. Built in the 9th century during the reign of the Sailendra Dynasty, the temple design follows Javanese Buddhist architecture, which blends the Indonesian indigenous cult of ancestor worship and the Buddhist concept of attaining Nirvana. The monument is popular for pilgrimage, with Buddhists in Indonesia celebrating Vesak Day at the monument. It ranks with Bagan in Myanmar and Angkor Wat in Cambodia as one of the great archeological sites of Southeast Asia. The origins of the name BorobUDur are unclear, although the original names of most ancient Indonesian temples are no longer known. The largest restoration project was undertaken between 1975 and 1982 by the Indonesian government and UNESCO, followed by the monument’s listing as a UNESCO World Heritage Site. The pilgrim journey begins at the base of the monument and follows a path around the monument, ascending to the top through three levels symbolic of Buddhist cosmology: Kāmadhātu, Rūpadhūtu and ArūpadHātu. The monument guides pilgrims through an extensive system of stairways and corridors with 1,460 narrative relief panels on the walls and the balustrades.

The name was first written in Raffles’s book on Javan history, but there are no older documents suggesting the same name. Evidence suggests that Borobudir was constructed in the9th century and subsequently abandoned following the 14th- century decline of Hindu kingdoms in Java and the Jvanese conversion to Islam. In Indonesian, ancient temples are referred to as candi; thus locals refer to Borobudeur Temple as Candi Borobuda. Most candi are named after a nearby village, so the monument should have been named \”BudurBoro\”. Raffles thought that the name might derive from boro, meaning ‘great’ or ‘honourable’ and Budur, for Buddha. Another possible etymology is that the temple is a corrupted simplified JavanESE pronunciation of Biara Beduhur, written in Sanskrit as Vihara Buddha Uhr. The term Buddha-Uhr could mean ‘the city of Buddur’, which is still survived today in Balinese vocabulary, which means ‘vihara of Buddha’ or vihara of a high place or on a hill. This suggests that a sacred building named Borobur was inaugurated by a daughter of Jinalaya Pramodhani in 824, when he was the king of Java. The inscription dated 824 is dated in Kedugung, Karangtengung Regency. It was mentioned in two inscriptions, both dated in the year 824.

You want to know more about Borobudur?

This page is based on the article Borobudur published in Wikipedia (as of Nov. 30, 2020) and was automatically summarized using artificial intelligence.