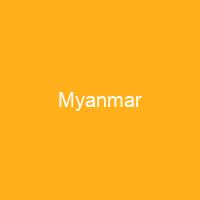 Myanmar is the largest country in Mainland Southeast Asia and the 10th largest in Asia by area. Its capital city is Naypyidaw, and its largest city is Yangon. The name of the country has been a matter of dispute and disagreement, particularly in the early 21st century.

About Myanmar in brief

Myanmar is the largest country in Mainland Southeast Asia and the 10th largest in Asia by area. As of 2017, the population was about 54 million. Its capital city is Naypyidaw, and its largest city is Yangon. The name of the country has been a matter of dispute and disagreement, particularly in the early 21st century, focusing mainly on the political legitimacy of those using Myanmar versus Burma. In April 2016, Aung San Suu Kyi said the question of which name should be used was up to the people of Myanmar. She added that she would make an effort to rename the country from “Burma” to “Myanmar” in the future. The issue remains a contested political and ethnic opposition and countries do not recognise the legitimacy of the ruling government or the country’s authority to rename itself. The income gap in Myanmar is among the widest in the world, as a large proportion of the economy is controlled by supporters of the former military government. The Human Development Index ranks Myanmar 147 out of 189 countries in human development. It is a country rich in jade and gems, oil, natural gas, and other mineral resources. Myanmar is also endowed with renewable energy; it has the highest solar power potential compared to other countries of the Great Mekong Subregion. In 2013, its GDP stood at US$56. 7 billion and its GDP atUS$221. 5 billion. The country is a member of the East Asia Summit, Non-Aligned Movement, ASEAN, and BIMSTEC, but it is not aMember of the Commonwealth of Nations.

It has been engrossed in rampant ethnic strife and its myriad ethnic groups have been involved in one of the world’s longest-running ongoing civil wars. In 2011, the military junta was officially dissolved following a 2010 general election, and a nominally civilian government was installed. However, the Burmese military remained a powerful force in politics and, on 1 February 2021, again seized power in a coup d’état. The terms are also popularly thought to derive from Brahma Desha after Brahma. The term Myamma, an ethnonym for the majority Bamar ethnic group, of uncertain etymology, is also used by many groups in the country to refer to the majority Myammai people, who live in the Irrawaddy valley. In the 9th century, the Bamar people entered the upper IrRAWaddy valley, and following the establishment of the Pagan Kingdom in the 1050s, theBurmese language, culture, and Theravada Buddhism slowly became dominant in thecountry. The British East India Company seized control of the administration of Myanmar in the 19th century. After a brief Japanese occupation, Myanmar was reconquered by the Allies and granted independence in 1948. It is not part of the Asean Summit, the Non- aligned Movement or BIM STEC, and it is a non-member of the Asian Economic Community.

You want to know more about Myanmar?

This page is based on the article Myanmar published in Wikipedia (as of Feb. 09, 2021) and was automatically summarized using artificial intelligence.