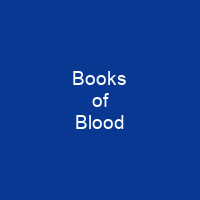 Books of Blood is a series of six horror fiction anthologies collecting original stories written by British author, playwright, and filmmaker Clive Barker in 1984 and 1985. Originally presented as six volumes, the anthologies were subsequently re-published in two omnibus editions containing three volumes each. A film of the same name was released on August 1, 2008.

About Books of Blood in brief

Books of Blood is a series of six horror fiction anthologies collecting original stories written by British author, playwright, and filmmaker Clive Barker in 1984 and 1985. Originally presented as six volumes, the anthologies were subsequently re-published in two omnibus editions containing three volumes each. Each volume contains four or five stories. The stories range in genres. Some are traditional horror, some are described by Barker as ‘dark fantasy’, and some are comical. The Last Illusion is notable for being a mixture of horror and noir while also introducing the occult detective Harry D’Amour. A film of the same name was released on August 1, 2008. The film was adapted into the film Book of Blood, written and directed by John Harrison. The opening story, \”The Book of blood\”, introduces the premise of the anthology series by revealing that a fake psychic is attacked one night by genuine ghosts and spirits who decide to make him a true messenger by writing stories into his flesh. The story mentions that the afterlife involves the ‘highways of the dead’ that sometimes intersect with the living world. The UK editions of Volume 6 close with a story, ‘On Jerusalem Street’, that features a man who pursues the fake psychic in order to skin him and take his ‘Book of Blood’ Clive Barker’s tagline for Books of Blood was: \”Everybody is a book of blood; wherever we’re opened, we’re red. The stories could range wildly in genre and tone, from the humorous to the truly horrific.

A common thread is that most of the stories feature everyday people in contemporary settings who become involved in violent, mysterious, andor supernatural events. Barker has stated in Faces of Fear that an inspiration for the books was when he read Dark Forces in the early 1980s and realised that a horror story anthology didn’t need to have narrow themes, consistent tone or restrictions to be considered a proper collection. For some editions, Clive Barker illustrated the book covers. Author Stephen King praised the book, leading to a quote from him appearing on the first US edition of the book: ‘I have seen the future of horror and his name is Clive Barker.’ The story ‘The Last Illusion’ is significant for introducing Barker’s occult detective character Harry D’Amour, who went on to appear in more of Barker’s writings, the Hellraiser comic book series from Boom! Studios, and the movie Lord of Illusions. This prologue, along with closing story “On Jerusalem street’, acts as a frame story for the series. A man named Mahogany begins killing people in New York subway trains, identifying himself as a ‘butcher’ in pursuit of ‘fresh meat’. After cooperating with him, the creatures board and consume the bodies, claiming they are the secret rulers of New York. They pull out his tongue to ensure his new meat, bringing them out of silence. The creatures, the ‘City Fathers,’ claim they have lived here since the first centuries of America before the first humans of America.

You want to know more about Books of Blood?

This page is based on the article Books of Blood published in Wikipedia (as of Jan. 04, 2021) and was automatically summarized using artificial intelligence.