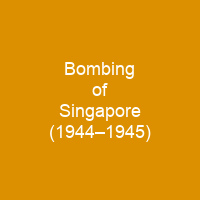 United States Army Air Forces conducted 11 air raids on Japanese-occupied Singapore between November 1944 and March 1945. Most of these raids targeted the island’s naval base and dockyard facilities. The raids had mixed results. While significant damage was inflicted on Singapore’s important naval base, some raids on these targets were not successful. Other attacks on oil storage facilities on islands near Singapore were ineffective.

United States Army Air Forces conducted 11 air raids on Japanese-occupied Singapore between November 1944 and March 1945. Most of these raids targeted the island’s naval base and dockyard facilities. After the American bombers were redeployed, the British Royal Air Force assumed responsibility for minelaying operations near Singapore. The raids had mixed results. While significant damage was inflicted on Singapore’s important naval base, some raids on these targets were not successful and other attacks on oil storage facilities on islands near Singapore were ineffective. The minelayers disrupted Japanese shipping in the Singapore area and resulted in the loss of three vessels and damage to a further ten. The Allied air attacks were successful in raising the morale of Singapore’s civilian population, who believed that the raids marked the impending liberation of the city. Singapore was bombed by Japanese aircraft on a number of occasions during the Battle of Malaya and subsequent fighting on the island itself; these raids caused many civilian deaths. Singapore Naval Base suffered little damage during the fighting in 1941 and 1942, and became the most important facility of the Imperial Japanese Navy outside the Japanese home islands. The effectiveness of what was already an inadequate air defence force was hindered by a lack of coordination between the Army and Navy, shortages of fire control equipment for the guns, and no fire-control radar or barrage balloons being available. The forces allocated to the defence of Singapore were not strong.

In early 1945, Japanese air defences for the island included only two Army companies equipped with automatic cannon, some IJN anti-aircraft units, and a small number of fighter aircraft. The Japanese Second Fleet and Third Fleet were transferred from the central Pacific to Singapore and the nearby Lingga Islands between February and April 1944 to be closer to their sources of fuel oil. Despite this, the XX Bomber Command ordered that a daylight attack on Singapore could not be successful, which required a 4,000 round trip round Kharagpur—which required a pilot to fly over the island for the first time. On 27 October, Arnold suggested to LeMay that the Japanese defeat at Leyte Gulf might have increased the importance of Singapore’s naval facilities and asked whether XXBomber Command could attack the island. LeMay’s staff believed that this would be a success, and on 30 October a photo-reconnaissance B-29 overflew Singapore for thefirst time and took good photos of the island for the first and only time. Inland Sea, the IJJ was concentrated into two groups of ships. One group returned to bases while the other was stationed at the Lingga Sea, while the others were stationed in the Inland sea, in the east of the Singapore Sea, in Inland Inland. The IJN operated most of its remaining battleships and aircraft carriers. Some of the anti- aircraft guns were crewed by Malay auxiliaries. The island was surrendered to the Japanese on 15 February 1942 and the island was taken over by the Commonwealth.

This page is based on the article Bombing of Singapore (1944–1945) published in Wikipedia (as of Nov. 03, 2020) and was automatically summarized using artificial intelligence.