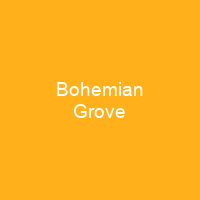 Bohemian Grove is a restricted 2,700-acre campground at 20601 Bohemian Avenue, in Monte Rio, California, United States. In mid-July each year, Bohemian Grove hosts a more than two-week encampment of some of the most prominent men in the world. The Grove is particularly famous for a Manhattan Project planning meeting that took place there in September 1942.

About Bohemian Grove in brief

Bohemian Grove is a restricted 2,700-acre campground at 20601 Bohemian Avenue, in Monte Rio, California, United States. In mid-July each year, Bohemian Grove hosts a more than two-week encampment of some of the most prominent men in the world. The Bohemian Club’s all-male membership includes artists and musicians, as well as many prominent business leaders, government officials, former U.S. presidents, senior media executives, and people of power. After 40 years of membership, the men earn \”Old Guard\” status, giving them reserved seating at the Grove’s daily talks. The Club motto is \”Weaving Spiders Come Not Here,\” which implies that outside concerns and business deals are to be left outside. The Grove is particularly famous for a Manhattan Project planning meeting that took place there in September 1942, which subsequently led to the atomic bomb. Other behavior at the campground has led to numerous claims and even some parody in popular culture. One example was former president Richard Nixon’s comments from a May 13, 1971 recording that: “The BohemianGrove, which I attend from time to time—it is the most faggy goddamned thing you could ever imagine.” The tradition of a summer encampment was established six years after the Bohemian club was formed in 1872. By 1882 the members of the Club camped together at various locations in both Marin and Sonoma County, including the present-day Muir Woods and a redwood grove that once stood near Duncans Mills, several miles down the Russian River from the current location.

Members may invite guests to the Grove for either the \”Spring Jinks\” in June or the main July encampment. Members can schedule private day-use events at theGro any time it is not being used for Club-wide purposes, and they are allowed at these times to bring spouses, family, and friends, although female and minor guests must be off the property by 9 or 10pm. The club members take particular pride in this event and often relate the story to new attendees. The original location of the Grove was purchased over the next decades, and members purchased land surrounding the original location to the perimeter of the perimeter in the basin in which it resides. Writer and journalist William Henry Irwin said: “You come upon it suddenly, and you cannot get far enough away from its perspective; you cannot see it as a whole. There is no step and glory is over you. One step and you can’t get far away from the trees, which stand a world of height above you, their pinnacles hidden by their fringes of the topmost fringes. Not long after the Club’s establishment by newspaper journalists, it was commandeered by prominent San Francisco-based businessmen who provided the financial resources to acquire further land and facilities. However, they still retained the international musicians and entertainers—who continued to entertain the club.

You want to know more about Bohemian Grove?

This page is based on the article Bohemian Grove published in Wikipedia (as of Jan. 04, 2021) and was automatically summarized using artificial intelligence.