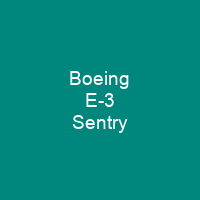 The Boeing E-3 Sentry is an American airborne early warning and control aircraft. It provides all-weather surveillance, command, control, and communications. It is distinguished by the distinctive rotating radar dome above the fuselage. Production ended in 1992 after 68 aircraft had been built. It was used in the Persian Gulf War, directing coalition aircraft against Iraqi forces.

About Boeing E-3 Sentry in brief

The Boeing E-3 Sentry is an American airborne early warning and control aircraft. It provides all-weather surveillance, command, control, and communications. It is distinguished by the distinctive rotating radar dome above the fuselage. Production ended in 1992 after 68 aircraft had been built. It was used in the Persian Gulf War, playing a crucial role of directing coalition aircraft against Iraqi forces. The aircraft’s capabilities have been maintained and enhanced through numerous upgrades. In 1996, Westinghouse Electric’s Defense & Electronic Systems division was acquired by Northrop Corporation, before being renamed Northrop Grumman Mission Systems, which currently supports the E- 3’s radar. The first EC-137 made its maiden flight on 9 February 1972, with the fly-off between the two radars taking place from March to July of that year. Favorable test results led to the production’ radar for the production aircraft. The Westinghouses’ radar was initially thought to be the winner due to the APG-15 Eagle’s development of its related F-63 Eagle radar. This radar can resolve 128 Doppler frequencies, while Hughes’s radars used analog filters based on the B-8EP-1 design for the F-15. This means that each mission can be modified before each mission, using a programmable computer software. This computer software was later designated ANAY-8-1 and designated AYK-1-YEP-8 by the B57 design team. In 1991, when the last aircraft had be delivered, E-2s participated in the Persian Gulf War, helping to direct coalition aircraft during the battle of Falluja.

The U.S. Air Force was seeking an aircraft to replace its piston-engined Lockheed EC-121 Warning Star, which had been in service for over a decade. In 1963, the USAF asked for proposals for an Airborne Warning and Control System. The new aircraft would take advantage of improvements in radar technology and in computer-aided radar data analysis and data reduction. Boeing initially proposed a purpose-built aircraft, but tests indicated it would not outperform the already-operational 707, so the latter was chosen instead. It would carry its radar in a rotating dome mounted at the top of a forward-swept tail, above thefuselage. In 1968, it was referred to as Overland Radar Technology during development tests on the modifiedEC-121Q. In 1970, Boeing was selected ahead of McDonnell Douglas’s DC-8 based proposal in July 1970. Initial orders were placed for two aircraft, designatedEC-137D as test beds to evaluate the two competing radars. As the test beds did not need the same 14-hour endurance demanded of theproduction aircraft, the EC- 137s retained the Pratt & Whitney JT3D commercial engines, and a later reduction in the endurance requirement led to retention of the Jt3D engines in production. The first USAF E-4 was delivered in March 1977, and during the next seven years, a total of 34 aircraft were manufactured.

You want to know more about Boeing E-3 Sentry?

This page is based on the article Boeing E-3 Sentry published in Wikipedia (as of Dec. 30, 2020) and was automatically summarized using artificial intelligence.