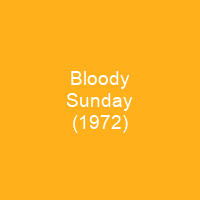 The Bogside Massacre was a massacre on 30 January 1972 in Derry, Northern Ireland. British soldiers shot 26 unarmed civilians during a protest march against internment without trial. Fourteen people died: 13 were killed outright, while the death of another man four months later was attributed to his injuries. The march had been organised by the Northern Ireland Civil Rights Association.

The Bogside Massacre was a massacre on 30 January 1972 in Derry, Northern Ireland. British soldiers shot 26 unarmed civilians during a protest march against internment without trial. Fourteen people died: 13 were killed outright, while the death of another man four months later was attributed to his injuries. The march had been organised by the Northern Ireland Civil Rights Association. The soldiers were from the 1st Battalion, Parachute Regiment, the same regiment implicated in the Ballymurphy massacre several months prior. Two investigations were held by the British government. The Widgery Tribunal, held in the immediate aftermath, largely cleared the soldiers and British authorities of blame. The Saville Inquiry, chaired by Lord Saville of Newdigate, was established in 1998 to reinvestigate the incident. It found that all of those shot were unarmed, that none were posing a serious threat, that no bombs were thrown and that soldiers put forward false accounts to justify their firing. On publication of the report, the British prime minister David Cameron made a formal apology on behalf of the United Kingdom. Following this, police began a murder investigation into the killings. It was the highest number of people killed in a single shooting incident during the conflict and is considered the worst mass shooting in Northern Irish history. Bloody Sunday fuelled Catholic and Irish nationalist hostility towards the British Army and worsened the conflict. Support for the Provisional Irish Republican Army rose, and there was a surge of recruitment into the organisation, especially locally.

The City of Derry was perceived by many Catholics and Irish nationalists in Northern Ireland to be the epitome of what was described as ‘fifty years of Unionist misrule’. Despite having a nationalist majority, gerrymandering ensured elections to the City Corporation always returned a unionist majority. By the end of 1971, 29 barricades were in place to prevent access to what was known as Free Derry. At least 1,332 rounds were fired at the British army, who also faced explosions and 180 nail bombs, who fired 364 rounds in return. In the remaining months of the 1971, thirty-two British soldiers were killed in the remaining period of the year. In contrast to the ten soldiers killed in 1971, ten of them were killed during the period of internment-internment period of 1971-1974. Both the Official IRA and Provisional IRA had established no-go areas for the BritishArmy and Royal Ulster Constabulary for the use of armoured vehicles. The British Army used armoured vehicles even to prevent the IRA from impassable the pre-assassable Derry barricades, even to the point where one of the IRA’s armoured vehicles had to be driven through the barricades to get to them. The city was perceived to be deprived of public investment: motorways were not extended to it, a university was opened in the relatively small town of Coleraine rather than Derry and, above all, the city’s housing stock was in an appalling state. The city therefore became a significant focus of the civil rights campaign led by organisations such as Northern Ireland civil Rights Association in the late 1960s.

This page is based on the article Bloody Sunday (1972) published in Wikipedia (as of Nov. 29, 2020) and was automatically summarized using artificial intelligence.