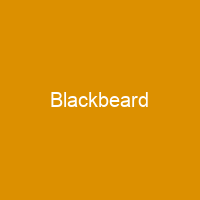 Edward Teach, better known as Blackbeard, was an English pirate. He operated around the West Indies and the eastern coast of Britain’s North American colonies. His nickname derived from his thick black beard and fearsome appearance. He was romanticized after his death and became the inspiration for an archetypal pirate in works of fiction.

About Blackbeard in brief

Edward Teach, better known as Blackbeard, was an English pirate who operated around the West Indies and the eastern coast of Britain’s North American colonies. His nickname derived from his thick black beard and fearsome appearance. He was romanticized after his death and became the inspiration for an archetypal pirate in works of fiction across many genres. Little is known about his early life, but he may have been a sailor on privateer ships during Queen Anne’s War. He settled on the Bahamian island of New Providence, a base for Captain Benjamin Hornigold, whose crew Teach joined around 1716. He formed an alliance of pirates and blockaded the port of Charles Town, South Carolina, ransoming the port’s inhabitants. On 22 November 1718 following a ferocious battle Teach and several of his crew were killed by a small force of sailors led by Lieutenant Robert Maynard. Teach was a shrewd and calculating leader who spurned the use of violence, relying instead on his fearsome image to elicit the response that he desired from those whom he robbed. He may have arrived in the Caribbean in the last years of the 17th century, on a merchant vessel. The 18th-century author Charles Johnson claimed that Teach was for some time a sailor operating from Jamaica during the War of the Spanish Succession, and that he had often distinguished himself for his uncommon boldness and personal courage. The privateer-turned-pirate Henry Jennings and his followers decided to use the uninhabited island New Providence as a base of operations in the early 18th century.

In contemporary records his name is most often given as Black Beard, Edward Thatch or Edward Teach. Several spellings of his surname exist—Thatch, Thach, Thache, Thack, Tack, Thatche and Theach. One early source claims that his surname was Drummond, but the lack of any supporting documentation makes this unlikely. It is commonly believed that at the time of his death he was between 35 and 40 years old and thus born in about 1680. He had in his possession a letter addressed to him by the Chief Justice and Secretary of the Province of Carolina, Tobias Knight. The author Robert Lee speculated that Teach may therefore have been born into a respectable, wealthy family. He accepted a royal pardon and settled in Bath, North Carolina, also known as Bath Town, where he accepted a Royal pardon. But he was soon back at sea, and attracted the attention of Alexander Spotswood, the Governor of Virginia, who arranged for a party of soldiers and sailors to capture the pirate. The only permanent residents on New Providence were the piratical followers, who were transient hangers and hangers-on. In New Providence’s harbour could easily accommodate the Royal Navy’s larger vessels but was too shallow for the Royal navy’s larger ships, so it was a place of temporary refreshment and refreshment for literally hundreds of transient pirates. In the early 19th century the island was filled with European vessels crossing the Atlantic Strait.

You want to know more about Blackbeard?

This page is based on the article Blackbeard published in Wikipedia (as of Dec. 09, 2020) and was automatically summarized using artificial intelligence.