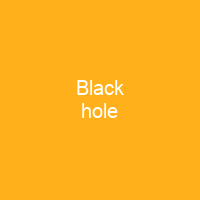 A black hole is a region of spacetime where gravity is so strong that nothing can escape. The boundary of the region from which no escape is possible is called the event horizon. In many ways, a black hole acts like an ideal black body, as it reflects no light. Event horizons emit Hawking radiation, with the same spectrum as a black body.

About Black hole in brief

A black hole is a region of spacetime where gravity is so strong that nothing can escape. The boundary of the region from which no escape is possible is called the event horizon. In many ways, a black hole acts like an ideal black body, as it reflects no light. Event horizons emit Hawking radiation, with the same spectrum as a black body of a temperature inversely proportional to its mass. This temperature is on the order of billionths of a kelvin for black holes of stellar mass, making it essentially impossible to observe. Black holes were long considered a mathematical curiosity; it was not until the 1960s that theoretical work showed they were a generic prediction of general relativity. The discovery of neutron stars by Jocelyn Bell Burnell in 1967 sparked interest in gravitationally collapsed compact objects as a possible astrophysical reality. On 11 February 2016, the LIGO Scientific Collaboration and the Virgo collaboration announced the first direct detection of gravitational waves. As of December 2018, eleven gravitational wave events have been observed that originated from ten merging black holes. On 10 April 2019, the firstDirect image of a black Hole and its vicinity was published, following observations made by the Event Horizon Telescope in Messier 87’s galactic centre. The radio source known as Sagittarius A*, at the core of the Milky Way galaxy, contains a supermassive black hole of about 4. 3 million solar masses. Black hole of stellarmass expected to form when very massive stars collapse at the end of their life cycle. By absorbing other stars and merging with other black holes, supermassiveBlack holes of millions of solar masses may form.

There is consensus that supermassiveblackholes exist in the centers of most galaxies. The presence of a Black Hole can be inferred through its interaction with other matter and with electromagnetic radiation such as visible light. If there are other stars orbiting a blackhole, their orbits can be used to determine the black hole’s mass and location. Such observations can beused to exclude possible alternatives such as neutron stars. If light waves were a wave, it is unclear what if any influence gravity would have on escaping light waves. Modern physicsredits John Michell’s notion of a light ray shooting directly from the surface of a super massive star, being slowed down by the gravity, stopping the star’s surface-falling freefalling back to the surface. The idea of a body so massive that even light could not escape was briefly proposed by astronomical pioneer and English clergyman JohnMichell in a letter published in November 1784. Michell correctly noted that such supermassive but non-radiating bodies might be detectable through their gravitational effects on nearby visible bodies. It is unclear, however, if light waves would have any early influence on the escaping light disc, rather than a wave of gravity. In 1915, Albert Einstein developed his theory of relativity, having earlier shown that gravity does influence light. Only a few months later, Karl Schwarzschild found a solution to Einstein’s motion equations for the point and mass and gave the same solution for the mass and mass of a star.

You want to know more about Black hole?

This page is based on the article Black hole published in Wikipedia (as of Dec. 14, 2020) and was automatically summarized using artificial intelligence.