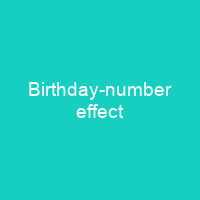 The birthday-number effect is the subconscious tendency of people to prefer the numbers in the date of their birthday over other numbers. It was first reported in 1997 by Japanese psychologists Shinobu Kitayama and Mayumi Karasawa. A similar effect, the name-letter effect, has been found for letters. Most people like themselves; the birthday is associated with the self.

About Birthday-number effect in brief

The birthday-number effect is the subconscious tendency of people to prefer the numbers in the date of their birthday over other numbers. It was first reported in 1997 by Japanese psychologists Shinobu Kitayama and Mayumi Karasawa. A similar effect, the name-letter effect, has been found for letters. The effect is most prominent for numbers over 12. Most people like themselves; the birthday is associated with the self. There is some evidence that the effect has implications for real-life decisions. In an online poll by Alex Bellos, a columnist for The Guardian, more than 30,000 people from all over the world submitted numbers. The number 7 was mentioned most, as it was in various later replicas of the study in other countries. In Western cultures the number 13 is often considered unlucky, hence the term triskaidekaphobia, fear of the number13. In the study, the number 100 had the highest proportion of people liking it and the lowest proportion ofpeople disliking it. The numbers 1 to 20 were liked by 9% more people than the higher numbers. Numbers that are the result of rote-learned multiplication tables were liked 15% more than the remaining numbers. Number fluency predicts number preference: hence multiplication table numbers are preferred over prime numbers. In a different study, marketing researchers King and Janiszewski investigated number preference in a different way. They showed undergraduate students random numbers and asked them to say quickly whether they liked the number, disliked it, or felt neutral.

All numbers under 100 were submitted at least once and nearly half of the numbers under 1,000. The researchers concluded that number fluency predicted number preference. The number 100 was the most popular number, followed by the numbers 0 to 99, 1 to 5, and 6 to 10. The study also found that the number 7 also came out on top in studies that asked people to name their favourite number. In other studies, people tend to disproportionately prefer, unknowingly, the letters of their own name. People who do not like themselves tend not to exhibit the birthday- number effect. In 1997, researchers observed that studies repeatedly showed that Japanese people do not seek to maintain and enhance their self-esteem. Whereas Western participants found that, on average, they falsely falsely overestimate the chances of good fortune happening to them. In cross-cultural studies, Japanese reported selfesteem to be hurt more by failures than boosted by successes, the opposite of what was reported by Americans. This made it unlikely that Japanese have no positive feelings attached to their own selves, and that they are not attached to them at all. This is why they are said to be more likely to be explicit measures of self- esteem, hence they believe they are better that they take credit for successes and blame others for failures, unlike Europeans and Americans. In addition, Japanese did not reveal such self-enhancing tendencies in cross-culturally studies with Western participants.

You want to know more about Birthday-number effect?

This page is based on the article Birthday-number effect published in Wikipedia (as of Dec. 03, 2020) and was automatically summarized using artificial intelligence.

I Never Liked You

I Never Liked You