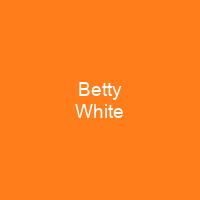 Betty Marion White Ludden is an American actress and comedian. She is known for her roles as Sue Ann Nivens on The Mary Tyler Moore Show and Rose Nylund on The Golden Girls. At age 88, she returned to a weekly sitcom playing Elka Ostrovsky on Hot in Cleveland. White has received eight Emmy Awards in various categories, three American Comedy Awards, three Screen Actors Guild Awards and a Grammy Award.

About Betty White in brief

Betty Marion White Ludden is an American actress and comedian. White is known for her award-winning roles as Sue Ann Nivens on The Mary Tyler Moore Show and Rose Nylund on The Golden Girls. At age 88, she returned to a weekly sitcom playing Elka Ostrovsky on Hot in Cleveland. White has received eight Emmy Awards in various categories, three American Comedy Awards, three Screen Actors Guild Awards, and a Grammy Award. She has a star on the Hollywood Walk of Fame, is a 1985 Television Hall of Fame inductee, and is a 2009 Disney Legend. White was one of the first women to exert control in front of and behind the camera and is recognized as the first woman to produce a sitcom. A staple panelist of American game shows such as Password, Match Game, Tattletales, The Hollywood Squares and The USD 25,000 Pyramid, White has been dubbed ‘the first lady of game shows’ White has stated that Betty is her legal name and not a shortened version of Elizabeth. She is the only child of Christine Tess, a homemaker, and Horace Logan White, a lighting company executive. Her paternal grandfather was Danish and her maternal grandfather was Greek, with her other roots being English and Welsh. White’s family moved to Alhambra, California in 1923 when she was a little over a year old, and later to Los Angeles during the Great Depression. She attended the Beverly Hills Unified School District in Beverly Hills, and Beverly Hills High School, graduating in 1939. Her interest in wildlife was sparked by family vacations to the Sierra Nevada.

She initially aspired to a career as a forest ranger, but was unable to accomplish this because women were not allowed to serve as rangers at that time. She wrote and played the lead in a graduation play at Horace Mann School, and discovered her interest in performing. White began her television career in 1939, three months after her high school graduation, when she and a classmate sang songs from The Merry Widow on an experimental television show. In 1949, she began appearing as co-host with Al Jarvis on his daily variety show on Hollywood Television, originally called Al Jarvis’ Make-Believe Ballroom. In 1951, White began hosting the show by herself in 1952 after Jarvis’ departure, spanning five and a half hours and half hours of live aditum television. In all of her variety series over the four-year span, White would sing at least a couple of songs during each broadcast. She would do just about anything, like singing on a local game show for no pay or making an appearance on This Is Your FBI. She appeared as Blondie, The Great Gildersleeve, and This is Your FBI on television. She was then offered her own radio show called The Betty White Show. White put her career on hold and volunteered for the American Women’s Voluntary Services. She also participated in events for troops before they were deployed overseas. After the war, White made rounds to movie studios looking for work, and was always turned down because she was not photogenic.

You want to know more about Betty White?

This page is based on the article Betty White published in Wikipedia (as of Dec. 19, 2020) and was automatically summarized using artificial intelligence.