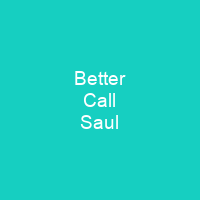 Better Call Saul is an American television crime drama series created by Vince Gilligan and Peter Gould. It is both a spin-off and a prequel of Gilligan’s previous series, Breaking Bad. Bob Odenkirk, Banks, and Esposito reprise their roles from Breaking Bad, as do many others who make guest appearances. A sixth and final season, consisting of 13 episodes, is scheduled to air in 2021.

About Better Call Saul in brief

Better Call Saul is an American television crime drama series created by Vince Gilligan and Peter Gould. It is both a spin-off and a prequel of Gilligan’s previous series, Breaking Bad. The show premiered on AMC on February 8, 2015, airing five seasons to date. A sixth and final season, consisting of 13 episodes, is scheduled to air in 2021. Better Call Saul has received critical acclaim, with particular praise for its acting, characters, writing, direction, and cinematography. It has garnered many nominations, including a Peabody Award, 21 Primetime Emmy Awards, eleven Writers Guild of America Awards, five Critics’ Choice Television Awards, four Screen Actors Guild Awards, and three Golden Globe Awards. Many critics have called it a worthy successor to Breaking Bad and one of the best prequels ever made, with some deeming it superior to its predecessor. In July 2012, Gilligan publicly hinted at a spinoff, stating that he liked the idea of a lawyer in which he takes on the role of Saul Goodman, the main lawyer in the show. Bob Odenkirk, Banks, and Esposito reprise their roles from Breaking Bad, as do many others who make guest appearances. The series includes flash-forwards to the events following the start of each season’s premiere. These scenes show Jimmy living as a fugitive under the identity of Gene Takic, the manager of a Cinnabon store in Omaha, Nebraska. Jimmy is inspired by his older brother Chuck McGill to leave his Chicago-area conman past, when he was known as \”Slippin’ Jimmy\”.

He initially works in the mailroom at Hamlin, Hamlin & McGill, where managing partner Howard Hamlin becomes his nemesis. While at HHM Jimmy befriends Kim Wexler, a fellow mailroom employee who completes law school and becomes a law firm’s associate, and their friendship later turns romantic. Jimmy’s life and career begin to intersect with the illegal drug trade and feature characters and story arcs that continue into Breaking Bad  and feature characters that continue to appear in the series. Jimmy takes the persona of the flamboyant, colorful Saul Goodman and his work as an attorney goes from questionable to illegal to unethical. He also becomes an informant for Gus Fring, a fried chicken entrepreneur whose restaurant chain is a front for the drug trade. The final season of the show will be the last to air on AMC. It will air on February 14, 2021. The last season will be a 13-episode special. The finale will be an episode-long special that will air in the spring of the following year. The first season will also feature a special episode that airs in the summer of the same year, entitled “Saul Goodman: The Movie”. The second season will air the same week as the second season of “Breaking Bad: Breaking Bad: Full Measure” The third season will feature an episode that will be aired in the fall of that year.

You want to know more about Better Call Saul?

This page is based on the article Better Call Saul published in Wikipedia (as of Jan. 01, 2021) and was automatically summarized using artificial intelligence.