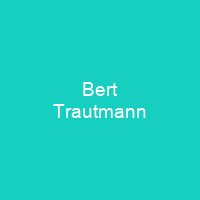 Bernhard Carl ‘Bert’ Trautmann was a German professional footballer. He played as a goalkeeper for Manchester City from 1949 to 1964. Named FWA Footballer of the Year for 1956, he entered football folklore. In 2004, he was appointed an honorary Officer of the Order of the British Empire. He died at home near Valencia, Spain, in 2013, aged 89.

About Bert Trautmann in brief

Bernhard Carl ‘Bert’ Trautmann was a German professional footballer. He played as a goalkeeper for Manchester City from 1949 to 1964. Named FWA Footballer of the Year for 1956, he entered football folklore with his performance in the 1956 FA Cup Final. In 2004, he was appointed an honorary Officer of the Order of the British Empire for promoting Anglo-German understanding through football. He died at home near Valencia, Spain, in 2013, aged 89. In August 1933, he joined the Jungvolk, the junior section of the Hitler Youth. He joined the Luftwaffe early in the Second World War, and then served as a paratrooper. He fought on the Eastern Front for three years, earning five medals, including an Iron Cross. In October 1941, he rejoined the 35th Infantry Division at Dnepropetrovsk, Ukraine, where the German advance had halted. He spent the remainder of the war in a military hospital in Ukraine. He was captured by the British as the war drew to a close and held in a prisoner-of-war camp in Ashton-in-Makerfield, Lancashire. He refused an offer of repatriation, and following his release in 1948, settled in Lancashires, combining farm work with playing goalkeeper for a local football team, St Helens Town. He then moved to Manchester City, where he made 545 appearances. He later moved into management, first with lower-division sides in England and Germany, and later as part of a German Football Association development scheme that took him to several countries, including Burma, Tanzania, and Pakistan.

He had a son, Karl-Heinz, three years his junior, with whom he enjoyed a close relationship. In the early 1930s, Bernhard had a keen interest in sport, playing football, handball and völkerball. He took to playing for the football club Blau und Weiss with enthusiasm, but the YMCA activities did not interest him to the same extent. He won several local junior athletics events and was awarded a certificate for athletic excellence signed by Paul von Hindenburg, the President of Germany. He lived in a working class area of Gröpelingen, where Bernhard lived until 1941. The bleak economic climate of the early 30s forced the Trautmanns to sell their house and move to an apartment block in the working-class area of Gröpeleden. He showed little aptitude for radio work, and was stationed in Occupied Poland, though the front line resulted in practical jokes to pass the time. One joke involved a car backfired on a staff sergeant, resulting in a backfired backfired and burning his arms on his arms. At the start of his prison sentence, he received a three-month prison sentence and received a court-martialled sentence in a hospital hospital. Despite his injury, he continued to play, making crucial saves to preserve his team’s 3–1 lead. Three days later an X-ray revealed it to be broken.

You want to know more about Bert Trautmann?

This page is based on the article Bert Trautmann published in Wikipedia (as of Nov. 23, 2020) and was automatically summarized using artificial intelligence.