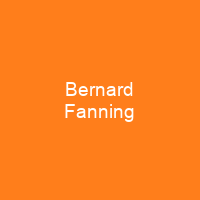 Bernard Fanning is an Australian musician and singer-songwriter. He was the lead vocalist of Queensland alternative rock band Powderfinger from its formation in 1989 to its dissolution in 2010. His solo album Tea & Sympathy debuted at number one on the Australian ARIA Albums chart, and spent 58 weeks in the top 50.

About Bernard Fanning in brief

Bernard Fanning is an Australian musician and singer-songwriter. He was the lead vocalist of Queensland alternative rock band Powderfinger from its formation in 1989 to its dissolution in 2010. Fanning’s solo music is generally described as a mixture of blues and acoustic folk. He plays guitar, piano, keyboards, and harmonica both when performing solo and also with Powderfinger. He has donated much of his time to philanthropic causes. He is an advocate for Aboriginal justice in Australia. His solo album Tea & Sympathy debuted at number one on the Australian ARIA Albums chart, and spent 58 weeks in the top 50 in Australia and New Zealand. His new album Much of the World was recorded at the end of a 12-year relationship with his girlfriend, Philippa Sison. The death of one of his brothers from cancer would be the inspiration for Vulture Street’s \”Since You’ve Been Gone\”. Fanning was raised with two brothers and a sister in an Irish Catholic family in the inner Brisbane suburb of Toowong. He attended St. Joseph’s College, Gregory Terrace, and began writing his own music at the age of 15. He dropped out of the University of Queensland to pursue a music career, after meeting Powderfinger guitarist Ian Haug in an economics class in 1989. In 1992, current guitarist Darren Middleton was invited to join Powderfinger by Fanning and Haug.

The line-up of Fanning, Middleton, Haug, Collins, and Coghill then remained unchanged. Throughout the late 1990s, Powderfinger rose to prominence throughout Australia, receiving several accolades and achieving highly successful record and concert ticket sales. Powderfinger reunited in 2007 and released two more albums before disbanding in late 2010. In 2003, Fanning performed the folk song \”Moreton Bay\” in his film Ned Kelly. On 31 October 2005 Fanning released his debut solo album entitled Tea &sympathy. It debuted at the number one spot on the ARIA album chart, spending 58 weeks on the chart, as well as an 18-week stay on the New Zealand album chart. Most of the writing was done between March and May 2005, and Fanning described the album as a ‘creative burst’ Most of his new work came from the reaction to the death of his brother in 2002, and came from his work on the album Much Of The World. In 2007 Fanning enlisted Gregor Jordan to film Powderfinger’s first live DVD, These Days: Live in Concert. He then enlisted Jordan to shoot Powderfinger’s first live CD, These days: live in Concert, in which Fanning performs the song ‘Shelter for My Soul’

You want to know more about Bernard Fanning?

This page is based on the article Bernard Fanning published in Wikipedia (as of Nov. 17, 2020) and was automatically summarized using artificial intelligence.