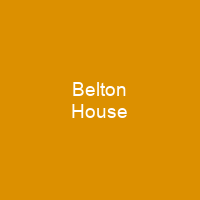 Belton House is a Grade I listed country house in the parish of Belton near Grantham in Lincolnshire. It was built between 1685 and 1688 by Sir John Brownlow, 3rd Baronet. The contemporary, if provincial, Carolean style was the selected choice of design. The house is considered to be a complete example of a typical English country house.

About Belton House in brief

Belton House is a Grade I listed country house in the parish of Belton near Grantham in Lincolnshire, England. It was built between 1685 and 1688 by Sir John Brownlow, 3rd Baronet. The contemporary, if provincial, Carolean style was the selected choice of design. Belton has been described as a compilation of all that is finest of Carolean architecture, the only truly vernacular style of architecture that England had produced since the Tudor period. For about three centuries until 1984, Belton House was the seat successively of the Brownlow family, which had first acquired land in the area in the late 16th century. Following World War I the Custs, like many wealthy English families, were faced with mounting financial problems and finally in 1984 they donated the house, with most of its contents, to the National Trust, which now opens Belton to the public. The assumption popular today, that Winde was the architect, is based on the stylistic similarity between Belton and Coombe Abbey, which was remodelled by Winde between 1682 and 1685. Others believe the design to be so similar to Roger Pratt’s Clarendon House, London, that it could have been the work of any talented draughtsman. The new house was fitted with the latest innovations such as sash windows for the principal rooms, and more significantly, with completely separate areas for the staff. The old house was situated near the church in the garden of the present house and remained largely unoccupied, since the family preferred their other houses elsewhere.

It is in a good state of repair and is visited by many thousands of tourists each year. The architect thought to have been responsible for the initial design is William Winde, although the house has also been attributed to Sir Christopher Wren, while others believe the house could be a copy of the design of the great London town house Clarendons House, completed in 1667. This theory is further demonstrated by the external appearance of the adjoining stable block at Moreatsworth, Buckinghamshire, and the fine wrought iron gates and overthrow at Belton. More than a century later, it may have done more than little more than provide the original plans and drawings, leaving the interpretation to the craftsmen on-site to provide the interpretation on the original drawings and drawings. The house is considered to be a complete example of a typical English country house, and is now open to tourists and members of the public for free guided tours of the grounds, gardens and grounds. The current owner of the house is the family of the Cust family, who have lived in the house for more than 100 years, and are now living in a new home in the nearby village of Chadderton, Lincolnshire. The estate was once owned by the Pakenham family, but they sold the manor house in 1619 for £1,000 a year. It has been the seat of a family of lawyers since 1598.

You want to know more about Belton House?

This page is based on the article Belton House published in Wikipedia (as of Oct. 31, 2020) and was automatically summarized using artificial intelligence.