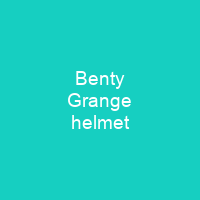 The Benty Grange helmet is a boar-crested Anglo-Saxon helmet from the 7th century AD. It was excavated by Thomas Bateman in 1848 from a tumulus in Derbyshire. It would have provided some protection against weapons, but was also ornate and may have been intended for ceremonial use.

About Benty Grange helmet in brief

The Benty Grange helmet is a boar-crested Anglo-Saxon helmet from the 7th century AD. It was excavated by Thomas Bateman in 1848 from a tumulus in Derbyshire. The helmet was constructed by covering the outside of an iron framework with plates of horn and the inside with cloth or leather; the organic material has since decayed. It would have provided some protection against weapons, but was also ornate and may have been intended for ceremonial use. The most striking feature of the helmet is the boar at its apex; this pagan symbol faces towards a Christian cross on the nasal in a display of syncretism. This is representative of 7th-century England when Christian missionaries were slowly converting Anglo- Saxons away from traditional Germanic mythology. The helmet seems to exhibit a stronger preference toward paganism, with a large boar and a small cross. The contemporary epic Beowulf mentions such helmets five times and speaks of the strength of men when the hefted sword, its hammered edge and gleaming blade slathered in blood, razes the sturdy boarridge off a helmet. It probably weighed about 1.4 kg, the weight of the Weston Park Museum’s 1986 replica. The framework, which now exists in sixteen corroded fragments, originally consisted of seven iron strips, each between 1 and 2 millimetres thick. A brow band, 65 cm long and 2. 5 cm wide, encircled the head.

Two strips of the same width ran from front to back, and from side to side. The four quadrants created by this configuration were each subdivided by a narrower subsidiary strip of iron, only one of which now survives. The 40 cm long nose-to-nape band extended 4. 75 cm in the front and 3. 8 cm in the back. The lateral band ran from ear to ear; both ends are broken off slightly below the brow band. The boar atop the crest was likewise associated with protection and suggests a time when boar crests may have been common, as do the helmet from Wollaston and the Guilden Morden boar. No hornized spaces created by the horn, now No hornizer now survives, but mineral traces on the iron strips preserve the grain pattern and abutted at the centre of each strip. The joins were hidden by further pieces of horn, placed in the shape of a double-headed axe, placed 4cm apart from the outside, and placed on top of the iron at the bottom, followed by two layers of horn—were held together by a succession of rivets. The eight plates of iron were probably softened and suggested to be cut from cattle, were cut to fit to fit the eight iron frame, and fitted over the iron, thereby hiding it, and hiding it from the eye. It is classified as one of the \”cresting helmets\” used in Northern Europe from the 6th to 11th centuries AD.

You want to know more about Benty Grange helmet?

This page is based on the article Benty Grange helmet published in Wikipedia (as of Nov. 30, 2020) and was automatically summarized using artificial intelligence.